Bargayo’s crucifixion to remind people of Christ sacrifice, to encourage them to repent 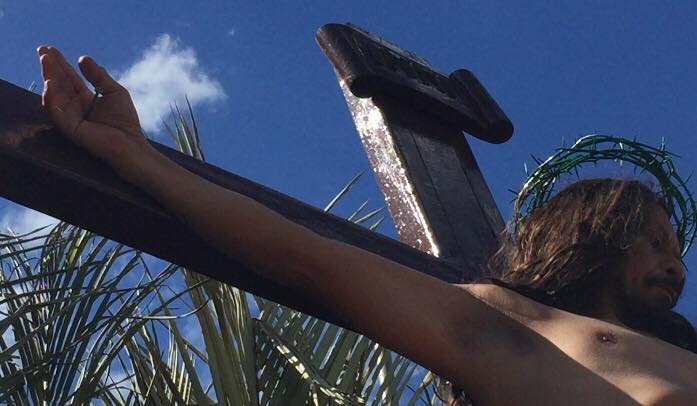 Gilbert Bargayo is nailed to the cross during a passion play in Tuburan town in northwest Cebu on Good Friday. | Rosalie O. Abatayo

TUBURAN, Cebu— Painful screams gush out of Gilbert Bargayo’s lips every time the man, acting the role of a Roman soldier, hammers the four-inch long nails into his hands and feet.

But for 59-year-old Bargayo, he would not mind to endure the pain of “dying” on the cross if it means having to remind the people of Jesus Christ’s sacrifice and to encourage them to “mend” their ways.

Bargayo had himself crucified on Good Friday, April 19, as he portrayed the role of Jesus Christ during the staging of His Passion and Death in Tuburan town, 92 kilometers northwest of Cebu City. This is Bargayo’s 27th time to be crucified and the seventh time in Tuburan.

(My purpose in having myself crucified is to remind the people to repent not only during the observance of the Holy Week. I just want to remind them as some have been lost in their vices already.)

Having been into illegal drug use himself, Bargayo also asked the youth to avoid using illegal substance or stop using it as it would not bring anything good to their lives.

He also asked parents to guide their children to prevent them from taking the wrong path.

Despite crossing into senior citizenship at age of 60 years old next year, Bargayo said he would continue his lenten penitential practice in the coming years as long as his health would allow.

Bargayo also emphasized that his taking the role of Jesus was to remind the people of the sacrifices that Christ had been through and not that he would want to play Christ himself.

Nick Dewhirst, an English national and cultural and religious practice enthusiast, was among the hundreds of foreign and local spectators who witnessed Bargayo’s “death on the cross.”

Dewhirst, who particularly went to Cebu to witness Bargayo’s crucifixion, said the practice was one of those that had made the identity of the Filipino people.

“It’s an element of festivals that still should exist … As long as it’s voluntary, he’s (Bargayo) doing it voluntarily, and that’s what he wants to do as he has done it 27 times already,” Dewhirst told CDN Digital.

After the crucifixion, Bargayo was carried to the town’s ambulance which was on standby and was brought to a nearby resort where he washed his wounds with the seawater.

Some guests of the resort also approached Bargayo and asked to be prayed over to which Bargayo heeded.

In his family’s home in Barangay Cogon in Carcar City, Bargayo said there had been people who had come to him for healing prayers which he had also granted.

Read Next
1,800 people brave the heat to watch Buhing Kalbaryo 2019