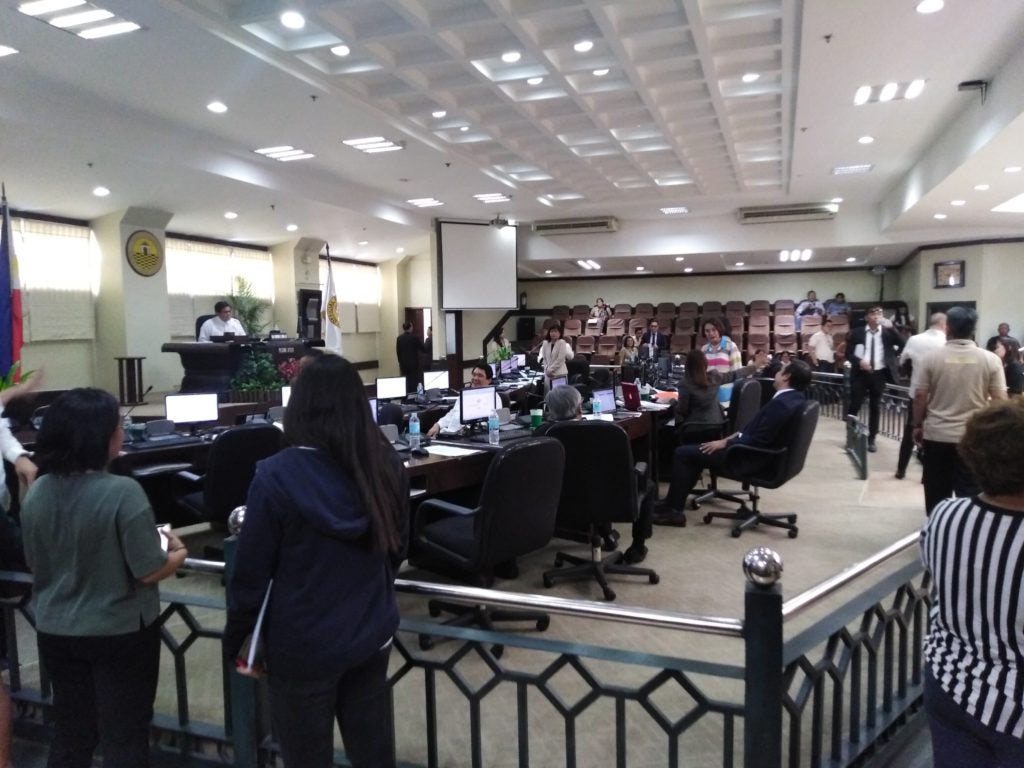 The Cebu City Council regular session on April 23, 2019 was disrupted by an earthquake prompting Vice Mayor Edgardo Labella, the presiding official, to declare a recess. None of the councilors left the session hall after the earthquake. | CDND Photo / Delta Dyrecka Letigio

CEBU CITY, Philippines — The regular session of the Cebu City Council on Tuesday afternoon, April 23, was disrupted by an earthquake leading to Vice Mayor Edgardo Labella’s decision to declare a recess.

But Cebu City’s councilors did not go out of the building unlike most organizations’ standard operating procedure (SOP) of gathering people at designated assembly points outside of the building after an earthquake.

Instead, they resumed the session barely 10 minutes after the earthquake happened.

This led Councilor Pastor “Jun” Alcover Jr. to raise the question: “Do we have an SOP that after an earthquake it is okay to resume and stay in the building?”

Alcover said the people in the session hall panicked during the earthquake and immediately rushed out of the building while the councilors, on the other hand, chose to stay in the edifice without proper assessment of the building’s safety.

Councilor Raymond Garcia said there is no SOP at the Cebu City Hall when disasters such as fires and earthquakes occur, unlike private companies where employees follow a set of procedures.

“They ask the employees to go down and they wait for a few minutes. They call the authorities to check if it is safe to come back. That is the only time to go back,” said Garcia.

As the session resumed, the City Council agreed to look into creating an SOP in cases when disasters such as earthquakes happen in the city hall. They also agreed to implement any previous ordinance or resolution on this matter.

The Philippine Institute of Volcanology and Seismology (Phivolcs) recorded the epicenter of the earthquake in San Julian town, Eastern Samar.

Intensity 5  was felt in Tacloban City, Leyte and Catbalogan City, Samar while Intensity 3 was felt in Cebu City.

Nobody was hurt in Cebu City following the earthquake, according to the Cebu City Disaster Risk Reduction Management Office (CDRRMO). / celr

Read Next
Is a 30-day ‘election recess’ possible for Cebu’s Provincial Board?