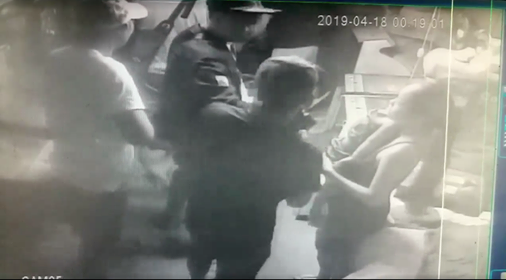 A screenshot of the CCTV footage showing the alleged mauling incident in barangay Carreta.

CEBU CITY, Philippines—The video of drug suspect Eddie Basillote being allegedly mauled by police operatives during a drug operation in Barangay Talamban in Cebu City on April 18, 2019 can be considered as evidence of possible abuse and torture by the police.

This was the pronouncement of Commission on Human Rights Central Visayas (CHR-7) Director Lawyer Arvin Odron, who directed a quick response team to investigate the incident after they received a copy of the closed-circuit television (CCTV) footage.

Odron told CDN Digital that if it proven that the police indeed used excessive force against the 28-year-old Basillote, charges in violation to the Anti-Torture Act of 2009 will be filed against the police operatives in the Office of the Ombudsman once they are identified.

However, Odron said they will have a difficult time identifying these policemen in the video since , according to the CHR-7 chief, the Philippine National Police (PNP) has been directed from the national level not to provide documents in line with the investigation to the CHR.

“We do not have access to their documents and this will make it more difficult for us to investigate,” said Odron in a phone interview.

The CHR-7 is currently gathering all available data to look into the incident and identify the perpetuators and also check if there is a need to file charges against them.

The six policemen may face suspension or even dismissal if proven that they have used unnecessary force in the arrest of Basillote.

Odron said law enforcement personnel are allowed to use a certain extent of force to implement the law, or in the case of a police operation, to subdue a suspect. However, he said that excessive force will constitute an abuse to the right of life and right to security of a citizen.

For this reason, he urged police to follow the proper procedure and respect the rights of the individual.

Police Colonel Royina Garma, the director of the Cebu City Police Office (CCPO), said that they welcome the investigation of the CHR-7 as it is the task of the agency to do so.

She said they will cooperate with the investigation of the CHR-7 to identify if there had been any abuse in the part of the unidentified police personnel during the alleged drug operations. /bmjo