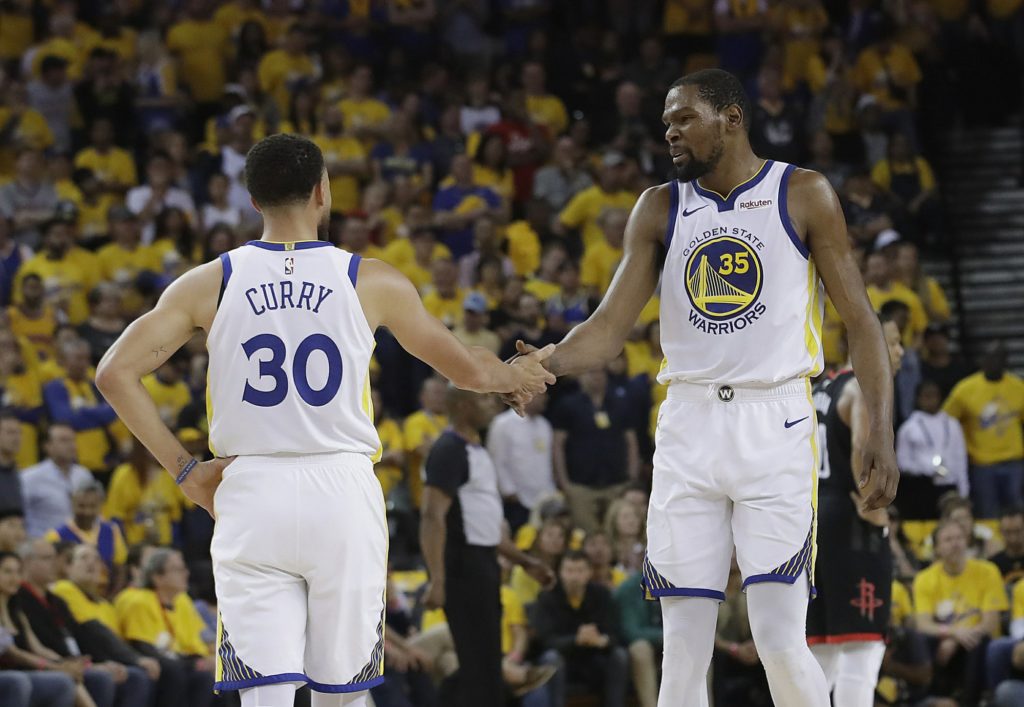 OAKLAND, California — Steve Kerr saw his share of spectacular postseason performances playing alongside one of the greatest ever.

“There was this guy named Michael, I can’t remember his last name,” the Golden State coach cracked in reference to former Bulls teammate Michael Jordan.

Kevin Durant is having a superb postseason run of his own.

Durant scored 35 points in outdueling James Harden and the Warriors held off the Houston Rockets 104-100 on Sunday (Monday morning, Philippine time) in the opener of what is shaping up to be a sensational best-of-seven Western Conference semifinal.

“When he’s being as aggressive as he’s been, I don’t think there’s anyone in the NBA, maybe the world who can stop him,” Draymond Green said of the two-time reigning NBA Finals MVP.

Houston’s Chris Paul was ejected with 4.4 seconds left for a second technical, though he said afterward he wasn’t sure what he did wrong — and he wouldn’t say whether he made contact with official Josh Tiven while arguing.

“I don’t know yet. Nobody told me. He just called a tech,” said Paul, who had rebounded a missed 3-pointer by Harden that could have tied the game with 9 seconds left and was arguing for a foul.

Green added 14 points, nine assists and nine rebounds for the two-time defending champion Warriors, who are meeting the Rockets in the postseason for the fourth time in five years, with Houston having never been victorious.

Game 2 is Tuesday night back at Oracle Arena.

Harden scored 35 points and Eric Gordon 27 after both struggled early. The Rockets shot 14 for 47 from long range.

Harden, who shot 9 for 28 and 4 of 16 on 3s, wasn’t shy about his frustration with the officiating and the lack of foul calls on Houston’s 3-point tries.

“I just want a fair chance, man. Call the game how it’s supposed to be called and that’s it, and I’ll live with the results,” Harden said.

Told of Harden’s remarks, Green said: “Huh? I’ve been fouled by James on a James 3-pointer before. I ain’t trying to hear that.”

Harden’s three-point play with 40 seconds left pulled Houston within 100-98. Stephen Curry knocked down a 3 on the other end over Nene moments later and finished with 18 points, seven rebounds and four assists.

Durant, who had combined for 95 points the previous two games against the Clippers, shot 11 for 25 and made 12 of 15 free throws in his fifth straight 30-point playoff performance — matching his career-best streak accomplished from June 1-12, 2017.

Durant said he was “just tailor made for the moment, I guess.”

“I’m starting to put everything together on both sides of the ball,” he added.

Technical fouls on Paul and Rockets coach Mike D’Antoni 2.1 seconds apart in the final minute of the third allowed the Warriors to take an 83-76 lead into the final 12 minutes after Durant converted the free throws.

Both Curry and Thompson had been listed as questionable nursing tender right ankles after they each sprained them in Game 6 against the Clippers on Friday night. Curry was cleared beforehand but Thompson had to go through warmups before Golden State’s medical staff determined he was fine to play.

“Yesterday was a long day, in the treatment room for a long time,” Curry said.

Kerr went with Andre Iguodala over 7-foot center Andrew Bogut in the starting five to go smaller out of the gates against the Rockets. He plans to stick with it for Game 2.

These West powerhouses fought through a seven-game series in last year’s Western Conference finals, when Golden State rallied from a 3-2 deficit to win Game 7 on Houston’s home floor.

Paul is on a mission after he sat out the final two games because of an injured right hamstring he hurt in Game 5. He had 17 points Sunday.

The Rockets missed their final 27 3-pointers in the deciding 2018 game and came out cold again, missing their first eight from deep before Harden connected at the 4:35 mark of the first.

Durant scored 45 and a playoff career-high 50 points his previous two games against the Clippers.

“You’re assuming you can defend him,” D’Antoni said before the game. “That’s an assumption nobody knows yet.”