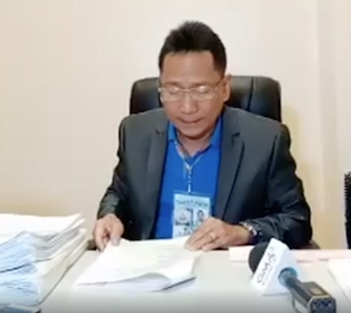 The Lapu-Lapu City Prosecutors Office, on Friday, May 10, 2019, finally released its joint resolution on the separate cases filed by the National Bureau of Investigation in Central Visayas (NBI-7) and Police Regional Office (PRO-7) against two different suspects on the brutal slaying of 16-year-old Silawan.

The panel of prosecutors handling the case, in its joint resolution, dropped the murder in relation to Cybercrime law charge filed against the 18-year-old former boyfriend of Silawan, which was filed by the NBI-7, and they recommended the filing of murder complaint against Renato Llenes, the self-confessed killer of the teen church collector.

Silawan is the Grade 9 student from Maribago National High School who was found dead at a vacant lot in Barangay Bankal on March 11. Her body was half naked with her face skinned to the bone.

City Prosecutor Ruso Zaragoza, in a press conference, said that they would file the charges against Llenes next week as they wanted to wait for the Silawan’s mother, Lourdes, to participate in the filing of the case.

Lourdes did not stand as the private complainant in the filing of the murder charge against Llenes before the Prosecutors Office.

The mother wanted the CICL (child in conflict with the law) to still be implicated in the case filed by the police, a request that the police did not heed because they did not have any evidence linking the CICL in the case. Llenes admitted to the crime and claimed that he did it alone.

Zaragoza said they would wait for Lourdes’ response until Friday, May 17.

Discussing the merits of their resolution, Zaragoza said they found the evidence presented by the NBI-7 against the teen suspect, who was then a minor when he was arrested on March 16, 2019, “very weak.”

While both the NBI-7 and the police presented almost the same set of closed-circuit television (CCTV) footage, Zaragoza said the witnesses presented by the NBI-7 failed to show up when they called for a clarificatory investigation to verify if the witnesses could assert that the person last seen with Silawan in the videos was really the teen suspect.

(The NBI presented three witnesses accounts claiming that the person in the video with Silawan was the CICL. However, when we called them up for clarificatory investigation and to affirm their sworn affidavit submitted by the NBI-7, none of them came.)

On the other hand, Zaragoza said the police submitted the affidavit of at least seven persons, including Llenes’ current and former live-in partners, who positively identified the 42-year-old suspect as the one in the CCTV.

Zaragoza added that some friends of Llenes, whom he allegedly met later in the night of March 10, affirmed that the clothes worn by the man in the videos were the same as what Llenes wore when they met and went out to a drinking session.

Another factor that the prosecutors considered was the connection of the suspects to the Facebook account with the profile name “CJ Diaz.”

(Based on the evidence presented by the NBI in this case, not one piece of evidence could connect the CICL to the CJ Diaz account.)

(If you compare the evidence against the CICL to the case of Renato Llenes, aside from Llenes admitting that CJ Diaz was his account, the current live in partner of Llenes confirmed that CJ Diaz is one of the FB accounts of Llenes.)

The prosecutor said that Llenes’ friends also testified that whenever they would be under the influence of alcohol, Llenes would show them the Facebook account with the name CJ Diaz.

Zaragosa added that while the NBI-7 claimed that some clothing, shoes and papers they seized from the CICL during his arrest on May 16 turned positive of bloodstains and DNA, the items could not be admitted as evidence in court because those were not covered by the search warrant issued by Branch 11 of the Cebu City Regional Trial Court.

Zaragoza also said that their resolution was not heavily dependent on the extrajudicial confession made by Llenes but more on the circumstantial evidence submitted.

Police Brigadier General Debold Sinas, Police Regional Office in Central Visayas (PRO-7) director, said in a separate interview that he was glad that the Silawan case was finally closed with the prosecutors’ resolution.

Sinas said that the police and the NBI-7 had kept a cordial relationship despite the different results that they came up in the investigation.

“This is just one of the many cases that we handled and worked together. If you imply that this case destroys our relationship, then no,” Sinas said./dbs