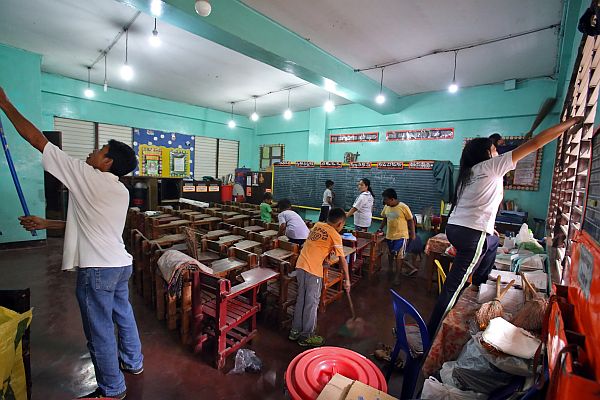 The annual Brigada Eskwela organized by the Department of Education (DepEd) will formally open on Monday. /CDN File Photo

CEBU CITY, Philippines — It’s the time of the year again where in parents are encouraged to pick up their tools and take part in making sure that public schools in their respective areas are ready for the opening of classes on June 3, 2019.

Schools nationwide will be holding the Brigada Eskwela 2019 starting on Monday, May 20. This will continue until Saturday, May 25.

Dr. Juliet Jeruta, director of the Department of Education in Central Visayas (DepEd-7), said the brigada may extend beyond May 25 in some school schools if there was a need to.

The Brigada Eskwela is an annual program of the Department of Education (DepEd) that is aimed to promote community participation in preparing school facilities for the opening of classes.

In Cebu, DepEd-7 held a regional kick-off of the Brigada Eskwela 2019 in Carnasa Island in Daanbantayan town that is located at the northern tip of Cebu province on Saturday, May 18.

Jeruta said they wanted to encourage island-residents to “paddle together” to help improve the condition of classrooms in their locality.

While Brigada Eskwela is voluntary, Jeruta said that parents should also be doing their share in caring for the schools that their children would be using in the next ten months.

(I would like to erase that notion that a child will not be accepted in school if the parents do not participate in the Brigada Eskwela. However, what we want to promote here the spirit of bayanihan. Everyone can contribute in very small ways in preparing the schools for the opening of classes.)

Jeruta said that when classrooms are prepared ahead of the opening of classes, teachers will already be able to focus on her class discussions during the school year’s opening. They no longer have to clean their classrooms and prepare the facility that they need.

She said the respective schools’ division offices were already directed to conduct an inventory of classrooms, teachers, utilities and learning materials that they need to determine their readiness to hold classes on June 3. /dcb