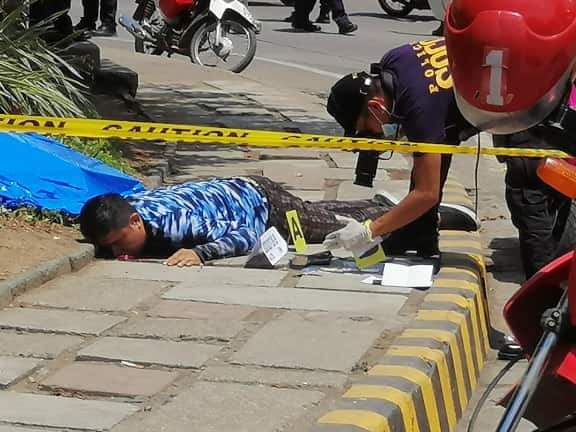 CEBU CITY, Philippines — A spat over parking space for habal-habal drivers or motorcycle-for-hire drivers may have started the tragic events leading to the fatal shootings on Friday, May 24, in Tamiya Road, Barangay Basak, Lapu-Lapu City.

Obon said that Sollano went to the police station last week to report the threat allegedly made by Castillas.

On Friday, May 24, Sollano, a president of the habal-habal association in the area, was parked along Tamiya road at past 10 a.m., looking for passengers when Castillas approached him, pulled out a gun and shot him dead.

Castillas, who worked as a Lapu-Lapu City traffic enforcer and moonlighted as a habal-habal driver, was in turn shot dead by Police Corporal Jacinto Sagarino, who responded to the shooting incident in the area.

Sagarino was manning the police outpost near the area where the shooting happened and rushed to the area when he heard the shots fired.

Castillas allegedly refused to surrender and pointed his gun at Sagarino as Castillas tried to flee from the crime scene.

The shooting incidents were captured in a security camera in the area.

With these instances, Obon said they were closely looking into personal grudge as the possible motive of the attack.

Police investigators also retrieved at least seven empty shells of a .45 caliber pistol in the scene.

Obon also said that Sagarino would be commended for his action.

“He did what was expected of him. (Because) pwede man na nga naa tay police diha pero walay kasing-kasing mo responde,” said Obon.

(We may assign a police there who does not have a heart to respond to the incident.)

Obon said that the police had held regular meetings with the habal-habal association as part of peace and order measures of the city.

He said that the police outpost was also timely positioned to when the incident happened.

Checkpoints will continue to be conducted as the election gun ban has yet to be lifted.

(He is a good worker and I have no problems, regarding how he did his job. I was really surprised at what happened.)

Castillas joined the CTMS last year (2018), and was described as a simple man who just did his duty as a traffic enforcer.

Castillas was also known to work as a habal-habal driver during his free time.

The deadly shooting happened at past 10 a.m., which was Castillas free time, since his shift would start at 2 p.m. to 10 p.m.

Daño also said that their regulations disallow traffic enforcers to have firearms.

The CTMS regrets the loss of their man, and said that they would be offering burial support to Castillas’ family.

(He is new on the job but he showed how hard he worked and that we have no problems with him.)/dbs