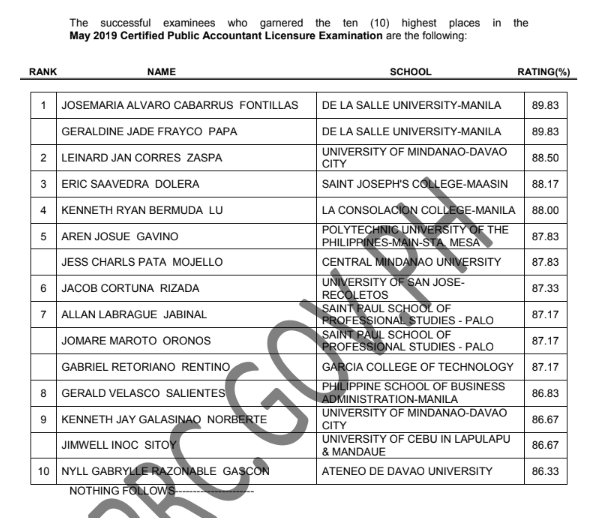 The top 10 passers of the May 2019 Certified Public Accountants Licensure Examination (CPALE). | Photo grabbed from the PRC.gov

The CPALE was administered by the Board of Accountancy in the cities of Manila, Baguio, Cagayan De Oro, Cebu, Davao, Iloilo, Legazpi, Tacloban and Tuguegarao.

Sitoy, on the other hand, ranked ninth with a rating of 86.67 percent.

USJ-R delivered the highest passing percentage among schools in Cebu.

The University of San Carlos (USC) delivered a 50-percent performance rating with 5 out of its 10 examinees passing the exam.

PRC recognized De La Salle University-Manila as the May 2019 CPALE top performing school with a passing percentage of 84.72 percent.

DLSU- Manila also delivered the top passers for the exam, Josemaria Alvaro Fontillas and Geraldine Jade Papa, who both had an 89.83 percent rating. /bmjo