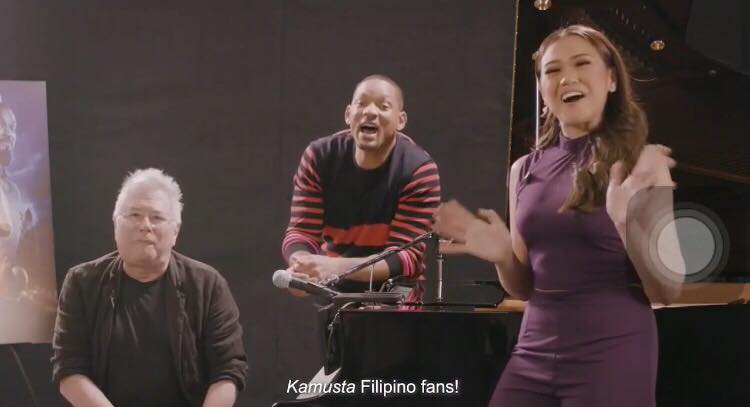 Cebu City, Philippines—She is one of the Filipino children before who grew up with his music.

Disney Philippines posted a video clip on Tuesday, June 4, 2019, in its  Instagram account the meet up of Amon, Menken, and “Aladdin” star Will Smith in Tokyo, Japan.

“That feeling of awestruck when you get to hang out with @AlanMenken and @WillSmith. Sabayan natin si @ItsMorisette makilig,” the post read.

(That feeling of awestruck when you get to hang out with @AlanMenken and @WillSmith. Let us get excited together with Morisette.)

The full three-minute video during their meet up was also uploaded on Walt Disney Studio’s Facebook page.

The video started with Morisette taping herself bound for Tokyo, Japan.

“You are not going to believe it, but I think Disney just arranged for me to meet legendary composer Alan Menken and the Genie himself, Will Smith,” an excited Amon said in the video.

The 23-year-old Minglanilla native then entered the room where Menken and Smith were singing, “Friend Like Me”, one of the songs in the 2019 film, “Aladdin.”

“Hi, Will,” she greeted the Hollywood actor.

“Welcome, how are you doing?” Smith hugged Amon.

“It is an honor to meet you. Hi Alan,” she greeted the legendary composer.

“Lea, told me about you,” Menken responded to Amon.

The Cebuana singer then told Menken that Filipino children grew up listening to his music, including her.

Smith then said he knew Amon has a local version of the song, “A Whole New World.”

Three weeks ago, Disney announced that Amon and “The Voice Kids” alumnus Darren Espanto had a rendition of the popular song.

Smith, who portrays Genie in the film requested Amon and Menken to perform together with the song, “A Whole New World.”

“Can the Genie have a wish? Because when you have the master and the lovely voice of Morissette here. I mean, I would like to make the wish that I hear the two of you perform that song together,” Smith said.

The Cebuana singer answered, “I would love that.”

Menken then played the piano and both performed a few stanzas including the song’s chorus.