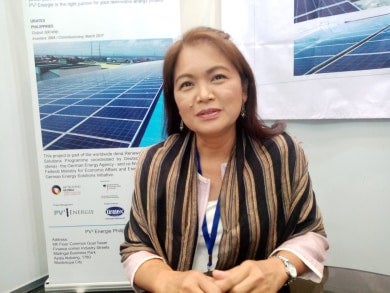 CEBU CITY, Philippines–There remains a huge potential for solar energy in Cebu and the rest of the Philippines.

Brenda Baylon, general manager of PV2 Energie Philippines Inc., said the company decided to join this year’s Construction Show Cebu held at the Sky Hall of SM Seaside in Cebu City because they saw the potential demand in Cebu.

Baylon told CDN Digital in an interview this morning, June 8, 2019, that solar energy only comprise four percent of the country’s renewable energy mix.

Hydro accounts for the bulk of the renewable energy mix at 50 percent while geothermal accounts for 27 percent.

Baylon noted a growing interest among industries for having their own photovoltaic (PV) or solar panel energy system.

She cited several factors for this like the growing acceptance for the solar energy concept and the decline in the cost of a solar panel system.

Baylon said the price has gone down between 10 to 15 percent, when compared to the price five years ago.

“Many people wanted to see proof of concept,” she said.

PV2 Energie targets industrial and commercial companies like factories and malls, with a minimum consumption of 100 kilowatts, Baylon said.

She explained that having a solar panel system without battery installed in a facility would immediately result in 20 to 30 percent savings on electricity expenses.

The investment in the system could be recovered between five to seven years depending on the power consumption, Baylon added.

It launched Scaling Solar, a one-stop-shop for governments that want to attract private investors to build large scale solar plants, but lacks the purchasing power of bigger emerging markets.

The program includes a package of technical assistance, templates for documents, pre-approved financing, insurance products and guarantees that take the guesswork out of whether a solar project is viable and bankable for both governments and investors. /Irene R. Sino Cruz###

Read Next
5 ways to know he’s really into you