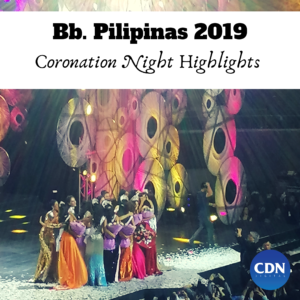 What went on in this 2019 edition that made people clap and raise eyebrows, and responded either in cheer or jeer?

CDN Digital takes you in some of the juicy scenes and happenings at Binibining Pilipinas 2019:

Program was supposed to start at 7 p.m. at the Smart Araneta Coliseum. A few minutes past 8 p.m., the opening production commence but just as it was about to wrap up, the music ended and the stage lights were not working. The voice over then announced that they will have to redo the program from the start. Audience referred to this “redo” as “Take 2.” Program resumed at 9:27 p.m., marking more than two-hour delay.

Bacolod’s Cassandra Chan was given a moment during the opening number as the ballerina showcased her talent. Chan was later announced as Miss Talent.

Heart and Chiz on coronation night

The power couple, Francis “Chiz” Escudero and Heart Evangelista (Love Marie Ongpauco-Escudero in real life), was present to support Miss Sorsogon, Maria Isabela Galeria. Chiz is leaving the Senate after 12 years to be the Governor of Sorsogon Province. Miss Sorsogon advanced as a Top 15 finalist but failed to get a crown.

Richard Gutierrez already delivered his “end of the Q and A” spiel when audience and production team noticed that he missed one name: Leren Bautista of Laguna. He made up for the mistake though and called Bautista.

She appeared calm and put together and ready for a crown. But Samantha Bernardo of Palawan was still unsuccessful in getting a crown on her head on her second attempt. She was declared as second runner-up in the 2019 edition, the same finish in her 2018 stint.

No crown for Vickie Rushton

The biggest upset of the night. Early in the competition, Rushton received a total of six awards. But she buckled, got distracted and lost her train of thought during the 30-second period that candidates were given to answer the questions asked by judges. The 2019 pageant was Vickie’s second attempt. She won as first runner-up in 2018.

Asked who among all the influential people does she want to meet, Bea Patricia “Patch” Magtanong said she will choose Angelina Jolie. She said Jolie was blessed with such a thriving career in Hollywood but she continued to serve. “As a woman she was able to use that influence, that voice, and that audience, to advocate for the causes that she believes in, like world hunger with the UN, and someday, if I am given the chance, I would like to be just like her.”

The questions that actress and Binibining Pilipinas 2019 judge Nadine Lustre asked to two candidates are among the most meaningful questions of the night. She asked Maria Andrea “Aya” Abesamis of Pasig: What advice would you give a 16-year-old girl for her to become more socially aware and become an empowered young lady?

To Samantha Mae Bernardo of Palawan: How do you react to rape jokes?

Miss Universe 2018 Catriona Gray proved once more why she the the best Miss Universe ever! In her message shortly after the farewell walk, Catriona emphasized the value of conquering yourself, conquering other perceptions of you and conquering for a purpose in order to conquer dreams. A teary-eyed Catriona said she will forever raise the Philippine flag.

The It’s Showtime host was prodded by the audience to sing during commercial breaks. Although the actress sang a few lines of Heart’s Alone and Aegis’ Halik, she refrained from singing the full songs, retaining the classy yet fun vibe of the production. Audience clapped and laughed at her antics though as they provided the much needed energy boost during lull times.

How about you? Anything else you noticed during the coronation night?

Read Next
CIT-U coach: Loss to UV a learning experience for young team