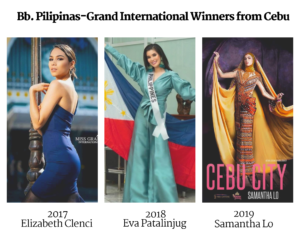 Lo, a model and Binibining Cebu Tourism 2017 winner, delivered a consistent and solid performance throughout the entire competition, bringing along her strengths in catwalk and public speaking.

Another Cebuana, Elizabeth Clenci, won the same crown in 2017 and went on to represent the Philippines in the Miss Grand International pageant in Phu Quoc, Vietnam, where she finished as second runner-up.

Ilene De Vera, who represented Mandaue City, did not make it to the Top 25 semifinalists.

During the question and answer portion, basketball player Christian Standhardinger asked Lo: “What is your best non-physical asset and why do you say so?”

Lo replied that her best non-physical asset is the “spirit.”

“I believe that when we have a strong spirit, a strong aura, we shine from within, we spread it. It’s a beautiful butterfly effect and I continue to encourage everyone to have positivity and show love. There’s no need for negativity, there’s nothing productive about it. Let’s continue to shine and show love, ” says Lo.