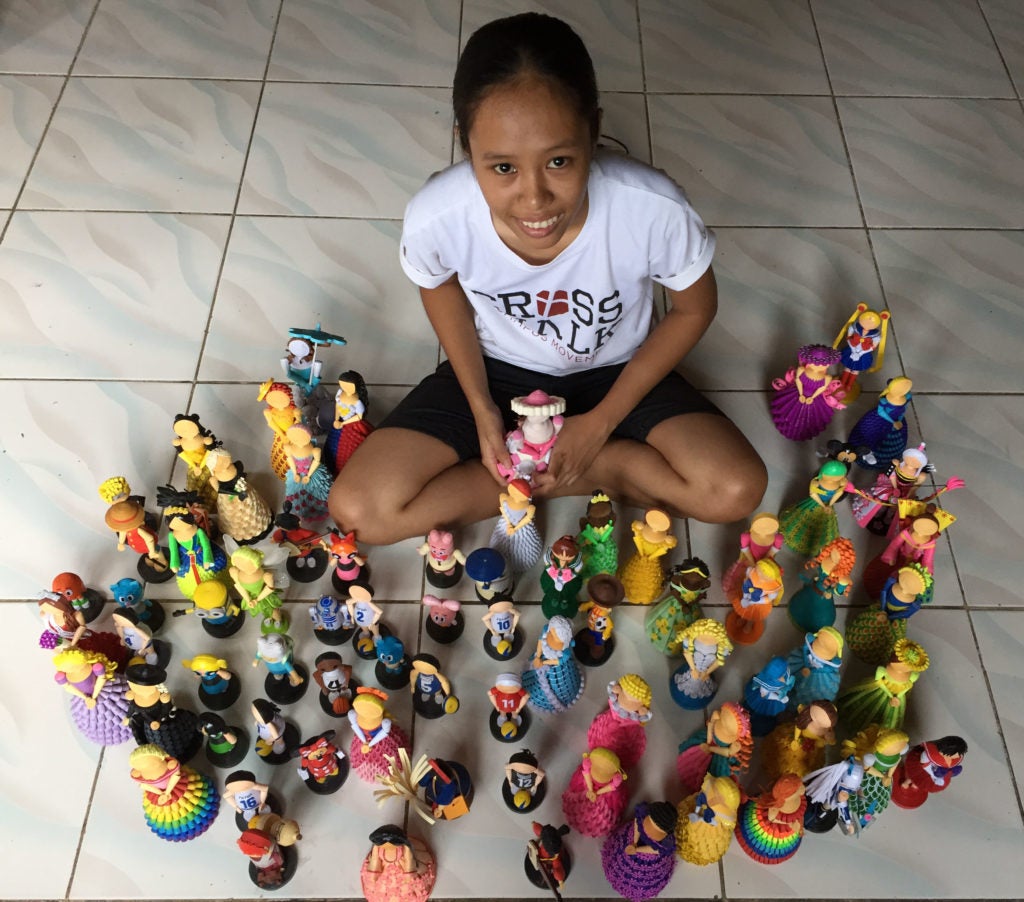 Like any typical child, young Libeth Paracuelles wished to have her own toy collection in her room.

However, her family could not afford to fulfill her dream due to financial challenges.

“My heart was longing to have a collection of artistic figures but I cannot afford to buy them. I took the step of visiting YouTube and watched how to make origami art, but sadly I failed. I just cannot fold perfectly. Then I saw this quilling art video by an amazing paper artist, [I] clicked it and then watched it,” she tells CDN Digital.

It only took two seconds for Libeth to fall in love with the art.

Quilling or paper filigree is the art of taking thin strips of colored paper, rolling them into a coil, pinching them to form a shape and then gluing the shapes together to create paper designs and objects.

Libeth is from Malhiao, Badian town, which is located about 97.8 kilometers from Cebu City.

She never expected that her obsession to collect toys led her to unleash her inner creativity in making 3D figures using quilling paper technique.

In an interview with CDN Digital, Libeth recalls what she felt when she made her first 3D figure in March 2017.

Her first try in quill-making led her to create a woman in a pink ball gown wearing a hat.

Libeth has since made close to 200 quilled figures. She has sold at least 50 of these figures for wedding events. 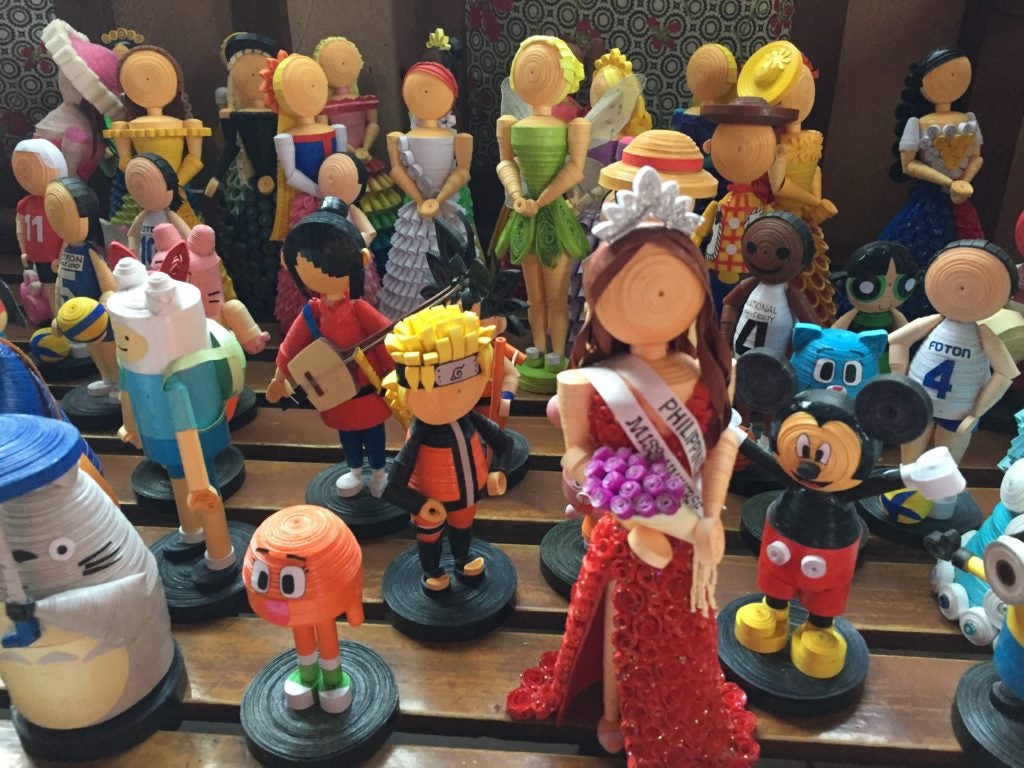 Naruto, Disney, and Ghilbi Studios characters are few of the 3D-quilled figures made by Libeth Paracuelles.

Disney Princesses and characters from anime shows like One Piece, Naruto, and Detective Conan are just some of the 3D-quilled figures that fill the room of Libeth.

Aside from making these figures, Libeth also loves to doodle, read books, and watch volleyball games on television.

She even created 3D-quilled figures of her favorite volleyball players of various professional women’s volleyball teams in the country.

Her craft was recognised by Filipino netizens after Philippine Superliga posted a photo in their Instagram account featuring Libeth’s 3D figures dedicated to the volleyball players. 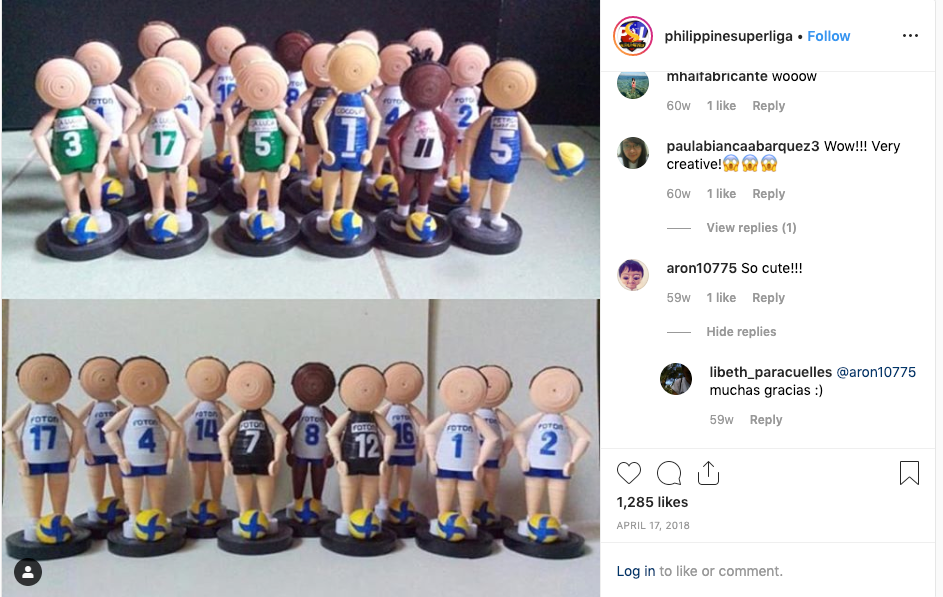 A family of artist

Libeth is not the only one who is talented in the family.

She grew up with parents, who are also passionate in the arts.

Her mother, 58-year-old Maria Dolores is into calligraphy or hand lettering.

Her father, Edilberto, liked to paint in his youth.

Maria Dolores was happy when she found out that her daughter developed a liking for paper quilling.

(We support her. I am happy because it is a talent given by God. Unlike other kids whose idea of fun is to spend time outside of the house.)

Libeth, the youngest of four siblings, looks up to her older brother, Marvin, who is currently working as a stop motion animator in an IT company in Cebu City.

Marvin unexpectedly landed a job in the animation industry after he finished his hospitality management course in college.

Her two older sisters, Lilian and Lilet, are also fond of other art forms namely drawing and sketching.

After graduating in May 2019, Libeth chose to be a freelance quiller and is now focusing on making 3D-quilled figures every day.

She makes one quilled figure a day and she sells it for at least P100 per piece depending on the size and design.

It was her brother, Marvin, who encouraged Libeth to transform her paper quilling hobby into a business. 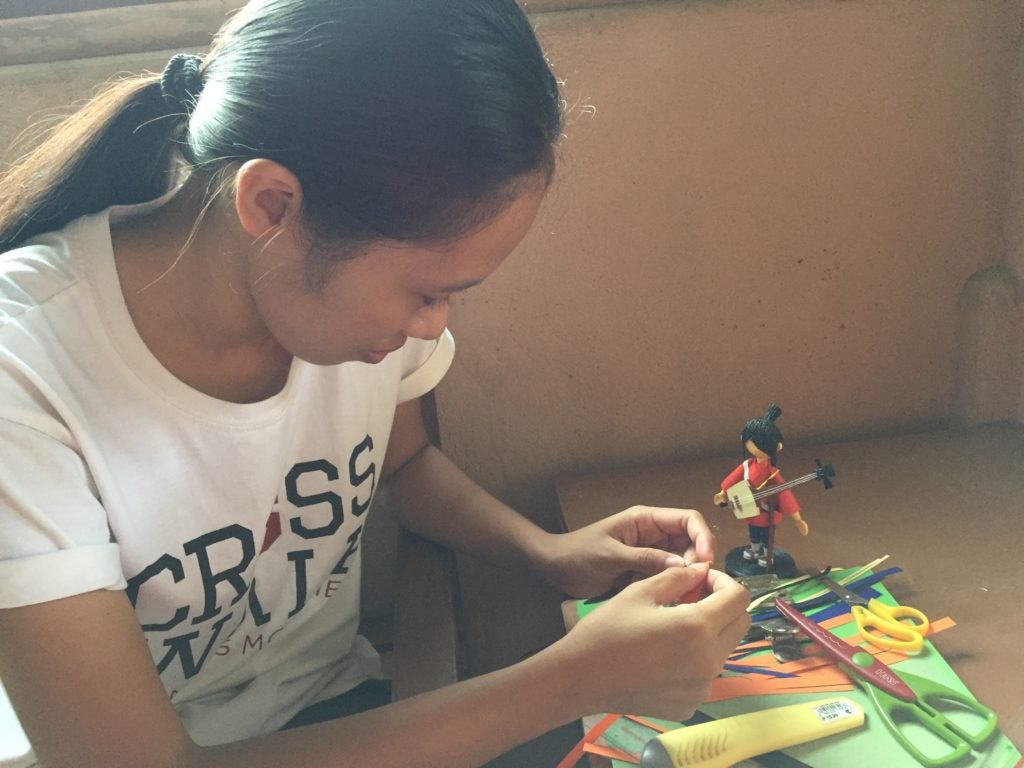 Libeth Paracuelle, 22, shows how to roll a strip of colored paper to create a coil.

“He encouraged me to do business [in paper quilling] because I can earn more than people who are employed in a company like him,” she says.

She has since set up a Facebook page, Li’s Paper Quilling, for those interested to order quilled figures.

Libeth failed to join an exhibit last year as she was fulfilling her responsibilities for her on-the-job training.

This is why she hopes to join an exhibit this year so she can showcase her craft to other people.

“I would love to showcase my talent in an exhibit and to encourage people to love art in many forms,” says Libeth. / celr