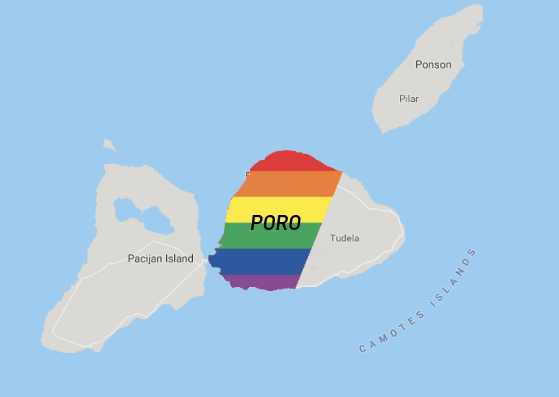 The town of Poro in Camotes Island, Cebu, has approved an anti-discriminatory ordinance to protect the members of the LGBTQ++ community. | CDND GRAPHICS /  Gresheen Gift Libby

CEBU CITY, Philippines — The town of Poro in Camotes Island “painted” the town with rainbow two days before the 121st celebration of Philippine Independence Day as an ordinance prohibiting the discrimination of the members of the Lesbians, Gays, Bisexuals, Transexuals, Queer and others (LGBTQ++) community was passed by the Poro Municipal Council.

Poro is located in Camotes Island, which can be reached from mainland Cebu (either from Pier 1 in Cebu City or Danao City, northern Cebu) on board a boat that sails for one hour and 30 minutes.

This is the first attempt in Poro to protect the rights of the LGBTQ++ community and the second ordinance passed by a local council in Cebu Province.

Poro followed Mandaue City, which was the first local government unit (LGU) in Cebu to enact such ordinance.

The Poro ordinance will then move to the Provincial Board for approval.

Gorgonio told CDN Digital that the approval of the Municipal Council of the ordinance during the regular session on Monday, June 10, is a “massive step” for the LGBTQ++ members.

Gorgonio said LGBTQ++ members suffered constant bullying in a community that has not been properly educated about the different types of sexuality.

“(The ordinance is important so) we can prevent the discrimination of the younger members of LGBTQ++ in Poro. I know people who suppressed their gender expression in work and in school. I want to end it. I was once a victim of it, especially of bullying. I don’t want my brothers and sisters to experience the same,” said Gorgonio.

The ordinance is the local take on Republic Act No. 4982 or “An Act Prohibiting Discrimination on the Basis of Sexual Orientation or Gender Identity or Expression (Sogie) and Providing Penalties Thereof.”

It follows closely on the premise of protecting the LGBTQ++ community from being discriminated in schools, workplaces, and public offices solely because of their Sogie.

The same applies to workplaces.

The ordinance prohibits companies in Poro to deny employment for Sogie workers on the basis of their sexuality or discriminating them by giving them lower pay or subjecting them to harsh working atmosphere.

If proven that an individual or a company has violated the ordinance, the violators can pay up to P5,000 and can serve jail time of up to 1 year.

The ordinance also entails the LGU to work on Sogie education and provide better healthcare for Sogie residents of Poro.

A Diversity Affairs for Sexual Orientation and Expression Commission and Social Welfare of LGBTQ++ will be formed to focus on providing access to specific health programs for the Sogie residents.

The commission is also responsible in conducting comprehensive adversity, anti-discrimination programs against hate crimes and discrimination as well as stigma studies and monitoring.

“I know the implementation of this ordinance is going to be a challenge especially in educating the public about it but I see it as a great avenue in our fight for discrimination so that no one will (have to) experience discrimination due to their gender identity and expression,” said Gorgonio.

Gorgonio hopes the Provincial Board will approve the ordinance so the implementation can begin and Poro can “be a safe haven for everyone.” / celr