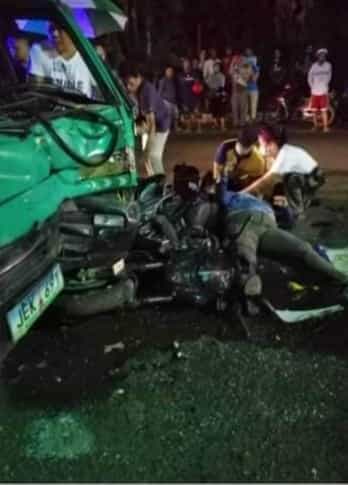 One of the injured is being helped by paramedics as they rush him to the hospital. | Courtesy of Talamban Police Station

CEBU CITY, Philippines — A 35-year-old driver is placed on hospital arrest after the Multicab pickup he was driving figured in a fatal road accident with a couple riding a motorcycle at dawn on Monday, June 17, in Sitio Nasipit, Barangay Talamban, Cebu City.

The driver of the motorcycle, Roland Heyrana, 49, did not reach the hospital alive while Heyrana’s wife was admitted at the hospital because of her injuries after the collision with the vehicle driven by Alex Alegabres, said Police Major Joven Taneo, Talamban Police Station chief, in a phone interview with CDN Digital on Monday evening.

Alegabres, who also suffered injuries in his body, was also admitted at the hospital and was on hospital arrest.

Taneo said that Alegabres might face a case of reckless imprudence resulting to homicide and physical injury, and damage to property.

The accident happened three days after Melvin Cañada, who sold viand, was killed in a road accident in Talisay City also at dawn of June 14. His motorcycle slid on the road made slippery by the dawn rain, and he was ran over by an SUV.

Read more: With motorcycle rider’s death, motorists urged to be careful when driving on wet roads

Meanwhile the Nasipit accident investigation showed that Heyrana was heading toward Barangay Talamban while Alegabres was heading in the opposite direction.

They, however, collided when Alegabres of Pinamungajan town and Heyrana of Barangay Tawason, Mandaue City lost control of their vehicles as they negotiated a slightly curved section of the road in the area./dbs

Read Next
3 dead, 2 wounded in shooting incidents in Metro Cebu in 21 hours