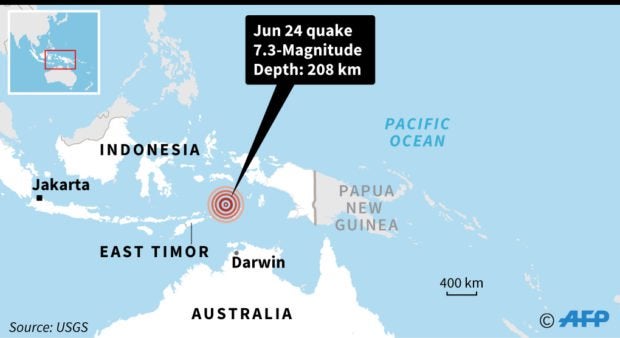 Map showing the epicentre of a 7.3-magnitude quake in Indonesia on Monday. AFP

JAKARTA — A 7.3-magnitude earthquake struck remote eastern Indonesia on Monday, forcing people to flee office buildings as far away as the northern Australian city of Darwin, officials and reports said.

The deep and powerful earthquake sent shockwaves around the region, with people on the tourist island of Bali as well as in East Timor reporting feeling the tremor.

Indonesia was the epicenter of the Asian tsunami in 2004 that killed more than 170,000 people but the Pacific Tsunami Warning Center said Monday’s quake was too deep to trigger a destructive wave.

It hit at a depth of 208 kilometers (129 miles) south of Ambon island in the Banda Sea at 11:53 local time, according to the US Geological Survey (USGS).

There were no reports of casualties or any major damage.

“Wow, that was quite an impact for #Darwin, hope everyone is safe,” the bureau of meteorology in Australia’s Northern Territory said on Twitter.

The Southeast Asian archipelago of Indonesia, which is one of the most disaster-prone nations on Earth, lies to the north of Australia.

While the quake was too deep to spark a tsunami, its raw power jolted the region.

“The earthquake occurred at a depth of about 200 kilometers, and as the energy spreads upwards and outwards from the point at which it occurs, it will be felt in places as far away as Darwin,” said Chris Elders, a quake expert at Australia’s Curtin University.

Residents of Dili, the capital of East Timor, which lies southwest of the epicenter, were terrified as buildings shook.

“I was shocked. People were running around and screaming,” Agida dos Santos told AFP.

“I saw the ground shaking — it was really scary,” added the woman, who was in her Dili home when the quake struck.

Earlier Monday, Indonesia’s Papua province was hit by a 6.1-magnitude earthquake, about 240 kilometers (150 miles) west of the town of Abepura, at a relatively shallow depth of 21 kilometers, according to the USGS.

There were no immediate reports of casualties after that quake.

A shallower 6.3-magnitude tremor hit the area last week, but the damage was not extensive.

Indonesia experiences frequent seismic and volcanic activity due to its position on the Pacific “Ring of Fire”, where tectonic plates collide.

Last year, a 7.5-magnitude quake and a subsequent tsunami in Palu on Sulawesi island killed more than 2,200 with a thousand more declared missing.

The massive quake that triggered the Asian Tsunami on December 26, 2004 struck in Aceh province and was measured at magnitude 9.1.