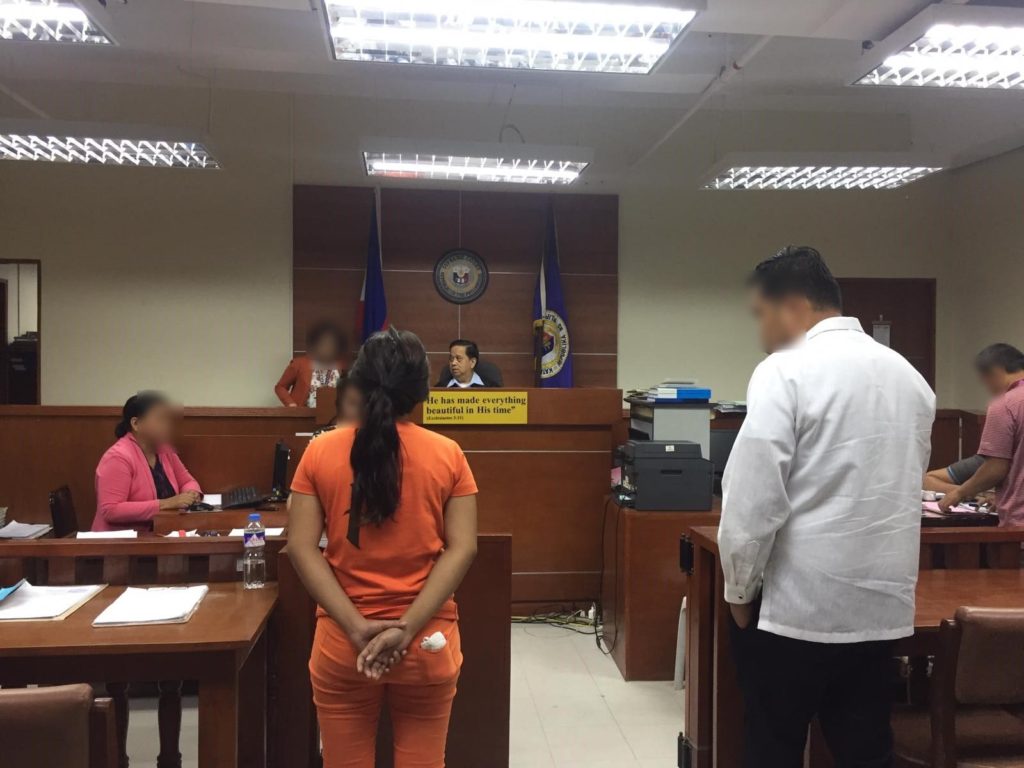 Cora (not her real name) was ordered imprisoned for 15 years and was directed to pay a fine of P1.1 million after she admitted to charges of online trafficking filed against her in court. /IJM Photo

CEBU CITY – A 22-year-old woman from Cordova town was sentenced to 15 years in prison after she pleaded guilty to online trafficking charges against her.

Cora (not her real name) has admitted to the crime during the arraignment of her case on Thursday, June 27, before Judge James Stewart Ramon Himalaloan of the Cebu City Regional Trial Court Branch 7.  She also pleaded guilty to a second charge on the possession of child pornography that was also filed against her.

Her victims were five children aged six to 15-years -old, said a press statement from the International Justice Mission (IJM).

The IJM statement says that Cora was arrested an entrapment operation by the National Bureau of Investigation – Anti-Human Trafficking Division (NBI-AHTRAD) on December 5, 2015 in her residence in Cordova town. NBI agents also rescued her five victims during their operation.

Judge Himalaloan ordered Cora’s imprisonment for 15 years for the crime of attempted trafficking in persons and ordered the her to pay P1.1 million in fine and damages. She was given another one to two months jail term and was asked to pay a fine of P50, 000 for her conviction on the possession of child pornography charge against her.

“This conviction is yet another victory in our fight against online sexual exploitation of our children. But this fight is not only about jailing Filipino online traffickers. The global criminal justice system also needs to go after foreign predators who lure Filipinos with their money to feed their inhumane and pervert desires. The Philippine criminal justice system will be more victorious if demand countries are also able to put these foreign predators behind bars,” said Cordova Mayor Mary Therese Sitoy-Cho.

IJM has so far supported 68 cases against persons convicted for the Online Sexual Exploitation of Children (OSEC), a violent and global form of human trafficking. OSEC typically involves a foreign online predator coming from a Western country and demanding sexually exploitative materials on children from Filipino online traffickers.

They also partnered with law enforcement agencies in the arrest of 216 OSEC perpetrators and the rescue of 503 victims and children at-risk across the country.  Many foreign online offenders coming from the U.S., Canada, Australia, the UK and Europe, who pay for and direct the live-streamed abuse in OSEC, have also been arrested and convicted.