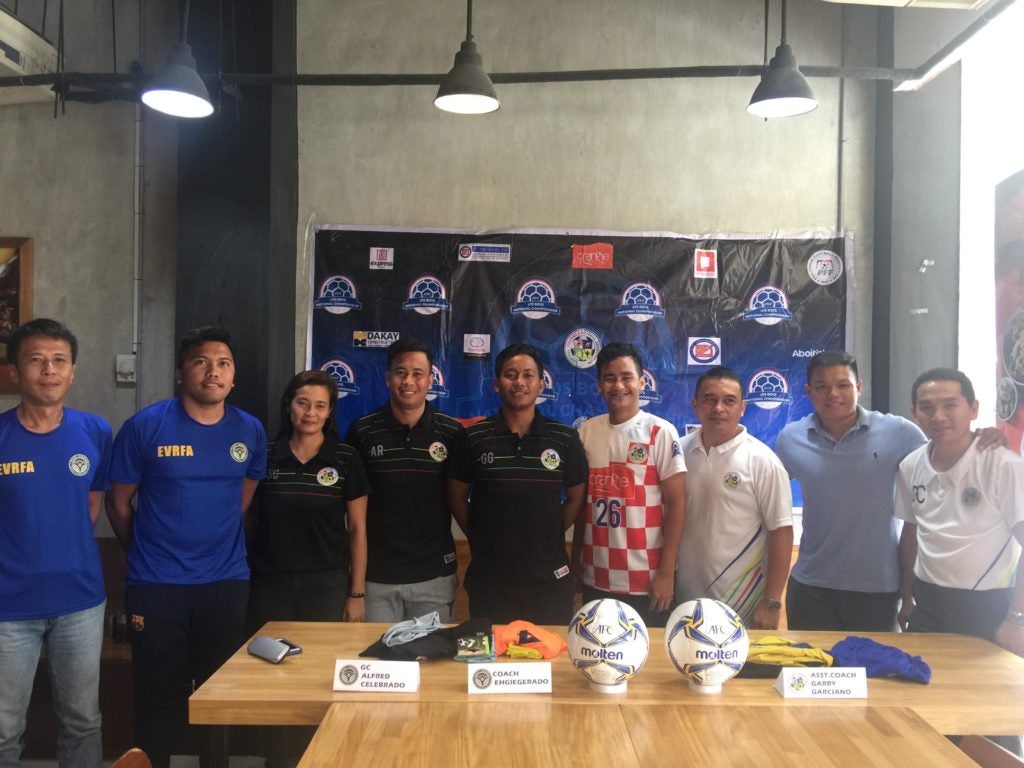 Representatives of the Eastern Visayas Regional Football Association (EVRFA) and Central Visayas Football Association (CVFA) and CVFA officials led by CVFA President Rodney Orale take time for out for a photo opportunity during a press briefing for the CVFA vs EVRFA football game on Saturday, June 13 at the Cebu City Sports Center. | Mars G. Alison

The CVFA is currently trailing the Negros Occidental Football Association (NOFA) at second place in Group E with a point after scoring a 1-all draw against the Panay FA last Saturday, July 6, 2019 in Barotac Nuevo, Iloilo.

NOFA has six points while CVFA and Panay FA each has a point.

(We will try our best to win because we were embarrassed in our previous games.)

CVFA Assistant Coach Ralph Eben Plaza said that for this game, they’re making adjustments and had chosen another 18 from their 36-team roster to compensate for those who got injured in their first two matches.

“We’ve analyzed what happened in their first two games and we’ve made adjustments especially in the attacking and defense as well,” said Assistant Coach Plaza.

Plaza will be joined by Jun Pintuan, also an assistant coach, and goalkeeping coach Garry Garciano in helming the team. Head coach Martin Ferrer is still in Manila for the  PFF ‘A’ Coaching Certificate Course.

For the first since the tournament started, the CVFA U15 will be joined by its team manager, Michael Pato, who arrived from Europe and who promised to gather all resources to support the team for the rest of the tournament.

The EVRFA, on the other hand, is also hoping to win their first game in the tournament. They were supposed to go up against Panay FA last June 29 but the game got cancelled.

According to EVRFA Coach Ehgie Gerado, they had to cancel the game because they were having field problems.

They cannot confirm yet if they will be holding their home games in Tacloban or at the Visayas State University in Baybay, Leyte.

According to EVRFA’s General Coordinator Alfredo Celebrado, their team is made up of players from Samar, Tacloban, Baybay and they even have players coming from Manila.

Thus, they really have a hard time getting together for training.

However, because they appreciate the chance they’re given of being able to play, they will compete.

The other match in Group E will have Negros Oriental Siquijor Regional Football Association (NOSIRFA) playing in their first home game versus Panay FA at the Silliman Ball Field in Dumaguete City./dbs

Read Next
Cause-oriented groups call on government to protect sovereignty