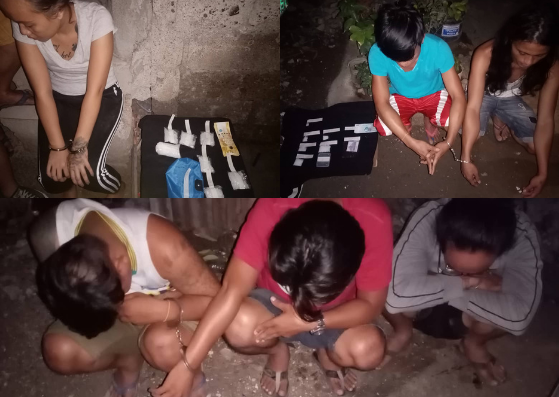 These are the six drug suspects arrested in three separate drug operations in Metro Cebu on July 12 with the confiscated illegal drugs worth at least P3 million.| Benjie Talisic

CEBU CITY, Philippines—Close to P3 million worth of illegal drugs were seized by the Drug Enforcement Units of two police stations in three separate buy-and-bust operations in Metro Cebuate late night of July 12 and early morning of July 13.

Maramag said 300 grams of shabu has a Dangerous Drugs Board (DDB) value of P2 million.

Maramag said Tisoy, 20, is renting a place in Sitio Pobre and was identified by other drug pushers as the supplier of illegal drugs.

The police official said Tisoy replaced her husband, who was arrested last year because of drug-related charges.

The operation happened in Barangay Labangon a few minutes past 2 a.m. on Saturday, July 13.

Dellica, 37, is a pedicab driver and resides on A. Lopez Street in Barangay Labangon. Canoy, 30, is a resident of Sitio Katangkungan in Barangay Basak Pardo.

Around 4 a.m., Labangon Police conducted another operation where three persons were arrested.

Macaraya, 42, is a resident of Barangay Quiot in Cebu City.

Bancoleta said the arrested individuals are newly-emerged names of drug pushers in the area. / celr

Read Next
‘New’ sports to be introduced to Cebu youth