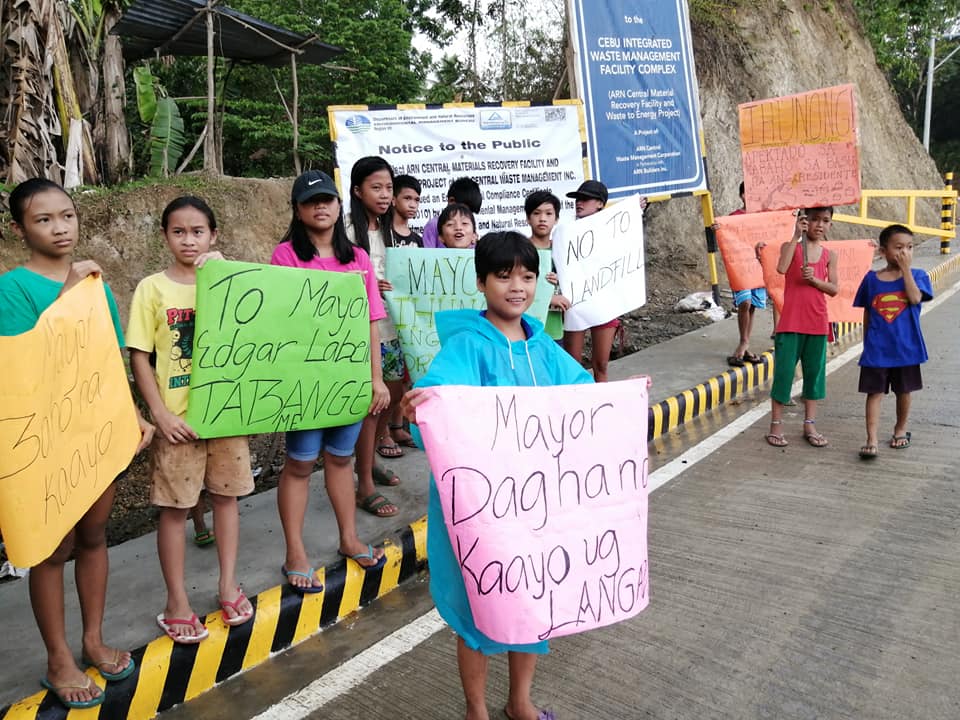 Residents from Barangay Binaliw in Cebu City calls on Mayor-elect Edgardo Labella to close the landfill for health reasons in this May 18, 2018 photo. | Photos from former Apas Barangay Captain Ramil Ayuman

CEBU CITY, Philippines — The Binaliw landfill is situated in a protected area that has been identified by the Department of Environment and Natural Resources as part of the Butuanon Watershed.

Lawyer Rey Gealon, Cebu City legal officer, said this was one of the reasons for the city cancelling the contract between the city government and ARN Central Management Waste Inc. as a party to haul garbage from the city’s transfer station to the Binaliw landfill which the firm was operating.

Gealon said that it was inappropriate to have landfill in that barangay because of it being part of a protected area.

However, the only thing that the city did was to cancel the contract between the city government and ARN. Aside from that, the Cebu City government has also earlier prohibited local government units from disposing their garbage in the landfill.

Gealon said that the Butuanon Rivershed, a water quality management area, is enclosing Barangay Binaliw and is the main source of water of the residents there.

“The stream running through the ARN landfill is a water source for an unknown number of households not just in Binaliw but also in neighboring (Barangay) Panoypoy, Consolacion (town), and other low-lying areas,” he said.

The ARN Landfill is approximately 1.76 kilometers away from the nearest juncture of the Butuanon River through Camella Miramonte and Greenwoods Executive Village in Talamban,” he said.

On June 28, 2019, the Central Visayas Center for Health Development of the Department of Health (DOH) took a water sample from a dug well in the hill-side perimeter of the ARN landfill situated between the creek or wide open canal and the national road.

But ARN President Sherwin Santos told CDN Digital in a text message that they had conducted baseline studies in various water bodies nearby and the results indicated that the water is not potable way before our facility construction began.

“In fact, there were reports that certain wells were closed by the City Health Office as early as January because of contamination, and this way before we began operation,” he said.

Santos also emphasized that  the Project’s Design is an Integrated Waste Management Facility with a WTE component and the Engineered Sanitary Landfill is only a minor component of the entire project.

“So I guess it safe to assume that we’re headed in the direction that the City envisions,” he said.

“The ideal land for a landfill must be flat with a hard non-permeable ground and areas prone to land sliding should be avoided. The landfill site should be chosen with regard to the sensitivities of the community’s and should be large enough to accommodate the community’s waste for a period of five  years or more,” Gealon said.​

But Mayor Edgardo Labella did not clearly say if he would like to close down the landfill.

He cancelled the contract with ARN but he recently allowed private haulers to temporarily dispose the city government’s garbage in Binaliw until they would find another landfill as a disposal point.