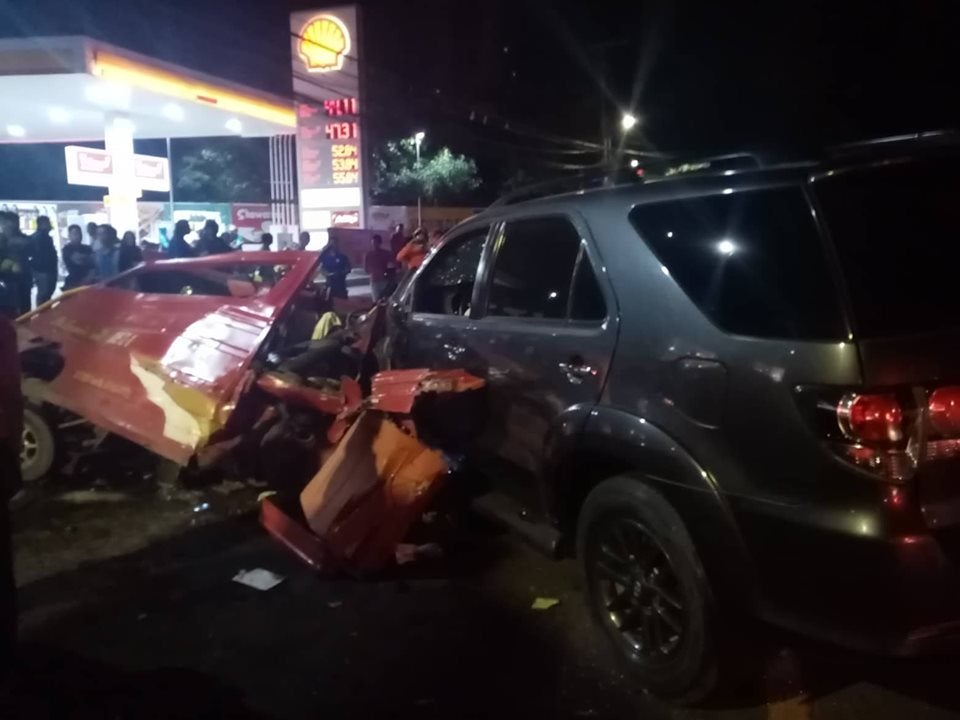 CEBU CITY, Philippines — Three persons were killed while at least five others were injured in a vehicular accident which happened along General Maxilom Avenue in Cebu City shortly after midnight today, July 20.

Police Master Sergeant Antonio Pizarras of the Parian Police Station said that the driver of a passenger multicab and two of his passengers died from severe injuries after they were trapped inside the unit that collided with an approaching Sports Utility Vehicle (SUV).

Angelo Gurrea, the driver of the Toyota Fortuner, remains detained at the Parian Police Station, while police prepare  a complaint for reckless driving resulting to multiple homicide, injuries and damage to properties against him.

Police also await the outcome of the liquor test that was administered on Gurrea, 21, immediately after his arrest.

Multicab passenger Carlo Gahator, 24, died on the spot while driver Raul Largado, 46, and a still unidentified passenger died at around noontime today or 12 hours after the collision.

Pizarras said that three other multicab passengers including Michael Abellana , who were thrown out of the unit as a result of the impact of the collision, remained at the CCMC.

Quoting the outcome of their initial investigation, Pizarras said that the Toyota Fortuner was headed for Barangay Lahug when Gurrea suddenly swerved to the left to overtake an Isuzu Crosswind Sportivo that was travelling ahead of him at around 12:30 a.m. today.

Gurrea’s Fortuner hit the left rear of the Sportivo before it collided with the multicab that was travelling on the opposite lane on its way to downtown Cebu City.

Pizarras said that Gurrea was unable to immediately apply the breaks and towed the multicab for another 23 meters.  He said that the Fortuner also side swept a motrocycle that was travelling ahead of the multicab injuring the driver and his backrider. /dcb