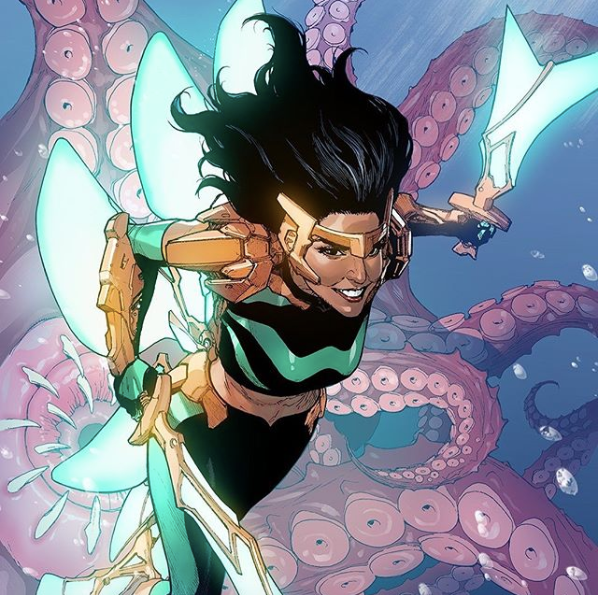 An Asian-American writer is behind the adventures of new Marvel superheroes Wave and Aero, who hail from Cebu and Shanghai respectively.

Alyssa Wong’s work will appear in the “Aero” comics, which follows the eponymous superhero. Aero is teamed up with Cebuana superhero Wave, who also has powers related to the elements. Wave can manipulate water, while Aero can control air.

“I never got to see Filipino characters when I was growing up, so it’s so, so cool to write Wave now!” Wong said in an interview with Marvel Entertainment on July 17.

“She’s strong because of her water manipulation powers, but she also draws strength from her community and her lolo (grandfather). And that feels emotionally true, to me, for a Filipino superhero.”

Writer Greg Pak created Wave and it was Cebuano artist Leinil Yu who designed her costume. Pak tapped Wong, an award-winning fiction writer in the US, to co-write with him.

He announced via Twitter on Saturday, July 20, that Wong was co-writing “Aero” stories with him starting with issue #2, which is out on Aug. 7.

.@crashwong is co-writing the Aero/Wave stories with me in the AERO series starting with issue #2! Check out the interview!!!! https://t.co/dGSvw8YqNI

Pak gushed about her work: “Her fiction is stunning. If you’re just checking out her work for the first time, I highly recommend ‘The Fisher Queen’ and ‘Olivia’s Table.’”

Wong too has been an admirer of Pak’s work and is thrilled to collaborate with him. She said that he had called her personally for the job.

“He’d read some of my work and thought I would be a good fit for the project. My mom is Filipina and my dad is Chinese, and a lot of my sci-fi and fantasy stories tend to be about women with strange, supernatural abilities. I was honored that he thought of me, so obviously I said yes.”

Wong shared that she and Pak have a collaborative process. They talk over the phone about the direction of the story then send a document back and forth until the story is finalized.

Pak posted a sneak peek of a page from the upcoming comic book, which appears to show Wave in a farewell embrace with her lolo.

Check out a lovely sneak preview page from AERO #2, written by @crashwong and yours truly with art by @popmhan and colors by @Toonfed! In stores August 7! pic.twitter.com/mWYJ5Gf4gQ

Wong recognizes that there is a difference between being a Filipino raised in the US and one in the Philippines. She ensures that she gets the Filipino voice by consulting with her mom and fellow Filipino speculative fiction writer Isabel Yap.

She will also write the origin stories for other female Asian Marvel heroes, particularly Crescent, White Fox and Luna Snow, who are part of the superhero team Agents of Atlas.  Niña V. Guno /ra

By: Morexette Marie B. Erram
Advertorial Arts and Crafts People and Ideas

Qube: A platform for creative communities

By: Isabella Angan
Advertorial Arts and Crafts What's Up!

Art is hope at the SM Stationery TikTok Artfest 2022