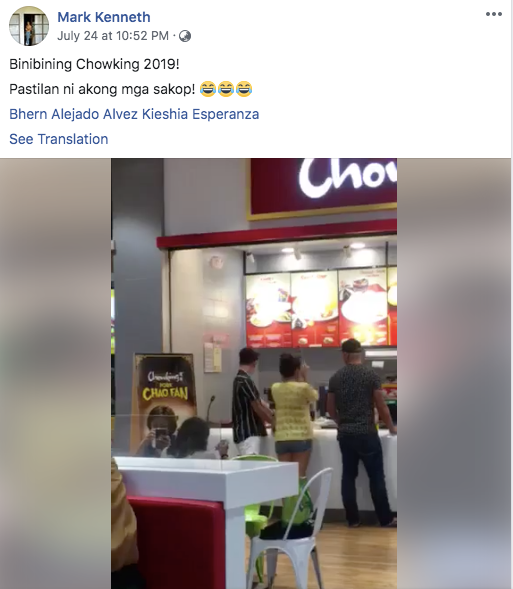 A screenshot of the pageant-like video of friends waiting for their order to be served.

This is one of the best lines you want to here in a day’s work.

But this group of friends took it up a notch when they decided to make it like a scene from a pageant.

Mark Kenneth Calog, 29, chief executive officer of a travel company, shared on his Facebook account last July 24 a video that got the online world laughing by captioning it with, “Binibining Chowking 2019, Pastilan ni akong mga sakop!”.

Calog told CDN Digital that this video happened last July 6, in one of the malls in Dipolog where his friends acted like beauty queens while waiting for their priority number to be called for the food they ordered in one of the food stalls in the mall.

“We had an event in Dipolog City from July 1-3 and was supposedly going back to the next day, July 4, but because of the big waves we decided to postpone our trip to Cebu, come July 6.  While we were waiting for our ferry to Cebu, we dropped by the mall to buy food and this video then happened” he said.

Have you ever been so excited over your food being served at a restaurant or at a mall?

Have you ever been so excited over your food being served at a restaurant or at a mall? Here's a video of a group of friends, who took waiting for the food to be served a hilarious twist by giving it pageanty vibes. | Video courtesy: Mark Kenneth Calog

The video shows that two of his friends, Bhern Alvez and Kiesha Magaso, who are pageant fans, decided to make it like of a pageant scene.

According to Alvez, that they got inspired by the recently concluded Binibining Pilipinas pageant.

The video gave the online world something to talk about and laugh about.

The comments section was fired up with comments of laughing emojis and a lot of “Hahahahas”.

Now, this is a way to hype up your meal! /dbs