KathDen to Cebuano fans: We are sorry 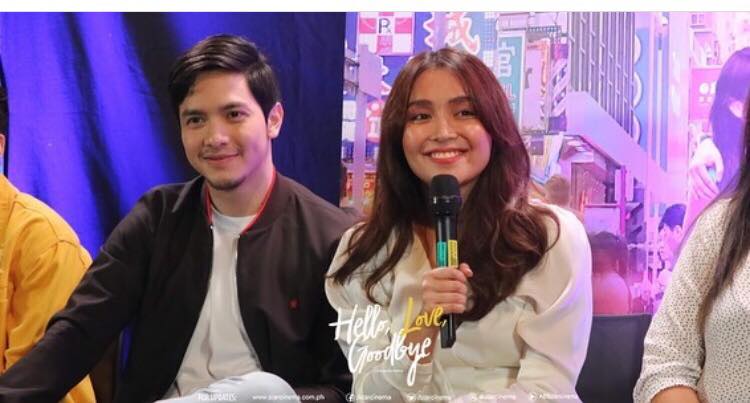 Actors Alden Richard and Kathryn Bernardo during one of their promotion activities of their new film, “Hello, Love, Goodbye.” |photo courtesy of Star Cinema

(Sorry. You know how much we love Cebu during the mall shows. There was a problem. Personally, we wanted to be there even just for a day.)

(I already packed my things.)

Both were inside the van when the interview happened while they were on their way to the last leg of their mall show in Manila on Sunday.

Working for the first time

The “Hello, Love, Goodbye” is their first project together.

The movie is helmed by award-winning filmmaker Cathy Garcia-Molina under Star Cinema which will hit Philippine cinemas on July 31.

The story talks about two Overseas Filipino Workers (OFW) in Hong Kong named Ethan (Richards) and Joy (Bernardo) who will fall in love with each other.

Richards said the movie was relatable and timely since the story also would tell the life of OFWs in Hong Kong.

For them to portray Ethan and Joy, they had an immersion and lived with OFWs in Hong Kong.

“Nakakatuwa po kasi no matter how hard life is in Hong Kong especially sa OFWs, they still manage to be positive and that is a common Filipino trait,” Richards shared what he learned from the OFWs.

The Kapamilya actress expressed gratitude to ABS-CBN and GMA for allowing them to work together even if they work in different networks.

(We really enjoyed. I hope this is the start of the actors to work with other stars from a different network. This seldom happens.)

Bernardo is from Kapamilya Network and the other half of love team KathNiel with her real-life boyfriend Daniel Padilla.

Both starred in “The Hows Of Us,” “Can’t Help Falling in Love,” and “Barcelona: A Love Untold.”

For Richards, he came from the popular love team in Kapuso Network called AlDub together with “Eat Bulaga!” host Maine Mendoza.

AlDub headlined films like “Imagine You and Me” and “My Bebe Love: #KiligPaMore.”/dbs