The Filipino ocean has been described as an epicenter of marine biodiversity, with the richest concentration of marine life on the entire planet. However, it is beset with human-made pressures such as overfishing and destruction of marine habitats that might have already caused the extinction of species of fish and marine life yet undiscovered. This is unfortunate and potentially catastrophic as we are a fish-dependent nation, with 7% of our population relying on fisheries and aquaculture.

As citizens in a country considered as a “home to almost 50% of all known coral species, and about a fifth of all marine species across the globe,” we cannot afford to stay passive and pretend that the crisis faced by our oceans does not exist.

The good news is there is a growing consciousness among members of the Philippine Bar to lead the fight to stop the plunder and destruction of our natural world, including of course our seas, and protect the right of our citizens to a balanced and healthful ecology.

It took a Cebuano named Tony Oposa, Jr., a dear friend and my mentor in this most challenging advocacy, to jumpstart that consciousness, in the landmark 1993 ruling of the Supreme Court, Minors Oposa versus Factoran, on the principle of intergenerational equity. It was penned by a highly-esteemed Supreme Court Chief Justice Hilario Davide, Jr., also a fellow Cebuano.

Tony says that the case “has planted a seed, and the seed is growing however slowly, however imperceptibly, but it is growing a little bit. You can only do so much in one lifetime.”

But, Tony has done a lot more. He has inspired more people, including lawyers who are public officials, to take up the cause of defending the Philippine ocean.

Two of them were honored recently in Iloilo City, former Iloilo Governor Arthur D. Defensor, Sr. and Judge Rogelio Amador, at a reception held during the  Fisheries and Coastal Law Seminar for Judges and Prosecutors in the Visayan Sea co-convened by the Bureau of Fisheries and Aquatic Resources-Region 6 and Oceana. BFAR-Region 6 under Director Remia Aparri’s stewardship is the lead BFAR for Fisheries Management Area 11 comprising the Visayan Sea. This columnist heads the Philippines office of Oceana. 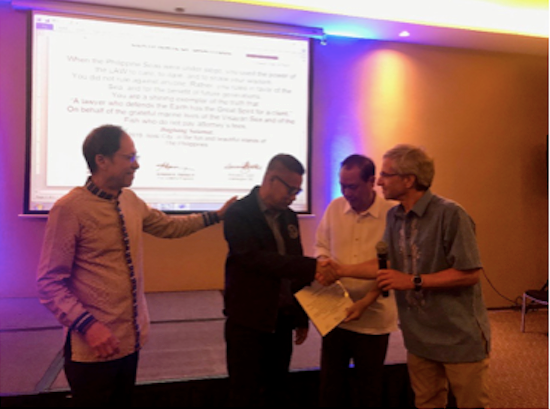 The event is part of the collective efforts to strengthen the judicial and prosecutorial system on knowledge of our environmental laws, with a highly skilled lawyers and scientists as speakers. The Keynote Speech was made by the National Director of the Bureau of Fisheries and Aquatic Resources, Fisheries Undersecretary Commodore Eduardo Gongona, Jr., PCG (Ret.) who emphasized the importance of protecting the municipal waters.

Read Next
Ed Hayco to remain as chairman of Cebu City Sports Commission?