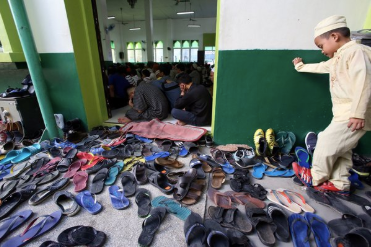 This is the call of the Muslim community in Cebu as they kick off the celebration of the Festival of Sacrifice or Eid al-Adha on Sunday August 11.

Based on the lunar calendar followed by the Islam faith, Eid al-Adha in the Philippines start in the evening of Sunday, August 11 and ends on Monday evening, August 12.

The largest gathering in Cebu is at the Plaza Independencia in downtown Cebu City.

Hadji Rasul Abangon, vice chairman of the Christian Muslim Brotherhood in Cebu, said their congregation prayer on Sunday morning was attended by around 7,000 people, mostly foreigners.

Foreigners or new migrants to Cebu who do not live near any mosques usually hear the congregation prayer for the celebration in the Plaza.

There are at least 8 accredited mosques in Cebu City. The largest one is in Barangay Mambaling.

Abangon said they started their prayer around 7:15 and ended around 8 a.m.

At around 1 p.m., Abangon said the sacrifices were offered in the mosques were they slaughtered livestocks and distribute it among themselves.

Eid al-Adha is celebrated by Muslims wordwide to commemmorate the story in the Scriptures of Abraham’s will to sacrifice his own son to the Lord.

Eid al-Adha is the second of the two largest festivities in the Islamic faith. The first was Eid al-Fitr or the end of Ramaddan which was held last June.

The Palace has declared August 12 a regular non-working holiday nationwide in observance of the Feast of Sacrifice.

On Monday, Abangon said there will no longer be big celebration in the Muslim Communities./dbs