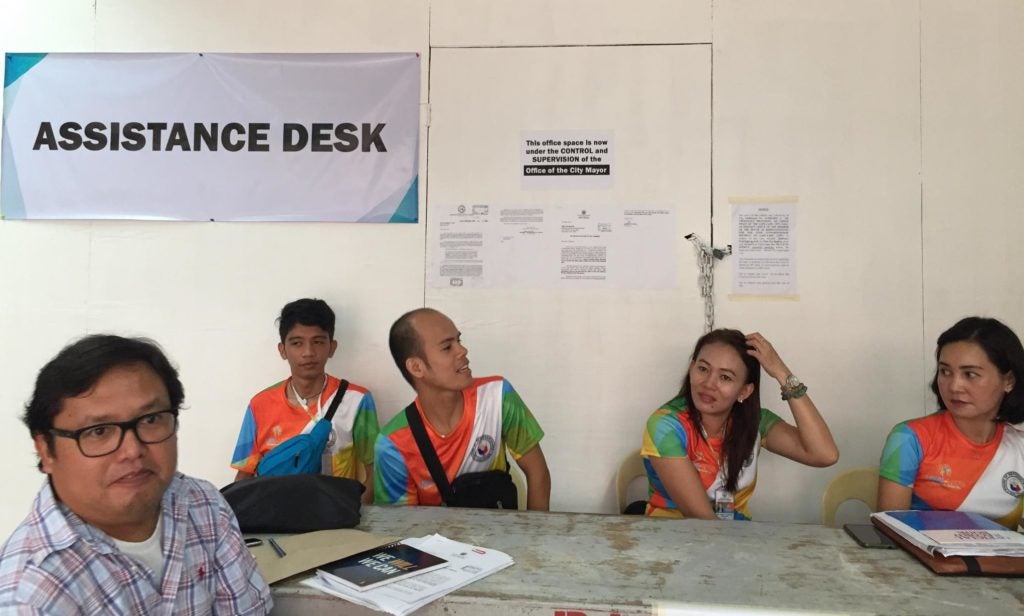 The staff of Lapu-Lapu City Representative Paz Radaza set up an assistance desk in front of her padlocked office inside the Lapu-Lapu City Hall. | Rosalie Abatayo

“In view of the recent circumstances, you are hereby given this final notice to remove your [pieces of] furniture and fixtures within the business hours of August 13, 2019,” Chan’s letter read.

Chan sent to Radaza notices to vacate on July 1 and on August 9, both of which went unheeded.

Radaza, the city’s mayor before Chan took over the post, has insisted she has the right to maintain an office at the City Hall by virtue of an ordinance that the city council passed  last June 9, or barely a month before she was to step down as the city’s mayor.

This morning, August 13, the front of the Office of the District Representative at the east wing of the Lapu-Lapu City Hall was padlocked and covered with white plywood, preventing Radaza’s staff from entering the office.

In turn, her staff brought in a table and set up an assistance desk in front of the padlocked office. The assistance desk catered to residents that sought medical assistance and other aid from the office.

Lawyer Kim Castro, the legal counsel of Radaza, said in an interview that they would maintain possession of the office because the city ordinance promulgated on June 6, 2019 ,which allocated an office for the district representative at the City Hall, is valid.

However, Chan’s second notice to vacate also came with DILG Opinion No. 40, which stated that the City Mayor, and not the Sangguniang Panlungsod, has the authority to allocate office spaces at the city hall.

DILG also opined that the city ordinance is “ineffective and invalid and therefore, should not be implemented.”

City Legal Officer James Allan Sayson, in a separate interview, said the DILG opinion should suffice to invalidate and nullify the ordinance that Radaza’s camp has been using to insist on their right to hold office at City Hall.

“When it comes to independent cities like Lapu-Lapu, ordinances passed are submitted to the Office of the President for review like how an ordinance from a component city is reviewed in the Provincial Board. In this opinion, the DILG Secretary, who is an alter ego of the President, already said that the ordinance is ‘ineffective and invalid and therefore, should not be implemented,'” said Sayson.

But Castro said it was not up to DILG, or the office of the mayor or the city attorney, to decide whether or not the ordinance is valid.

This is because a case has been filed in Lapu-Lapu City Regional Trial Court by three private personalities who asked the court to nullify the ordinance that allowed Radaza to hold office at the city hall.

However, Sayson said the city does not recognize the pending case since the city is not a party in the case.

In another letter reply that Radaza sent to Chan’s office at the 4:11 p.m., she  maintained that they could not comply with the mayor’s final notice.

“The operation of the district office with limited staff does not in any way disrupt the operations in the city hall and is aimed at servicing the Oponganons,” said Radaza.

Radaza also warned the mayor that they will take legal action against him if he will confiscate the items from her office and the possessions of her staff. /elb