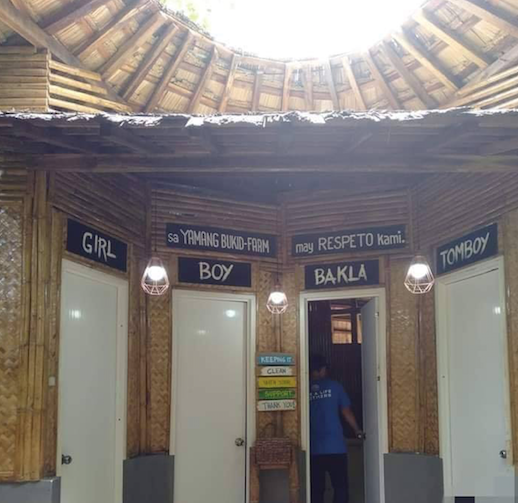 Gender sensitive labels placed on comfort rooms in this Pawalan farm caught the attention of Jannette Reprado because it was amusing and witty at the same time. | Contributed Photo by Jannette Reprado

Aklan native Jannette Reprado told CDN Digital that she took the photo of this well-labeled comfort rooms during her visit in one of the farms in Palawan because she found the concept amusing and witty at the same time.

“We had our family vacation last May pa, and I just took a picture of the restroom with the labels, girl, boy, bakla, tomboy, because it was my first time to see something like this,” she said.

Reprado said that the photo remained on the photo gallery of her phone for more than two months before she decided to post this on her Facebook page on August 15 to also help raise awareness on the need for properly labeled comfort rooms in the country.

The mother of three said that she was also inspired to post the photo following the incident in a mall in Quezon City where trans woman Gretchen Diez was arrested for using the female comfort room.

Reprado’s photo has been making its rounds on social media since last week. The photo was even shared on the social media accounts of news organizations in Aklan.

She recalled that it was one of her children who asked her to come and see the comfort room labels at the Yamang Bukid Farm, one of the areas which they visited during their Palawan trip in May.

At first, she thought that the labels were funny. But then later on she started to realize that the owners of the farm were trying to be gender sensitive more than anything else.

“Sa Yamang Bukid Farm, may RESPETO kami,” were the words written above the comfort room labels.

What do you guys think? Should other public comfort rooms in the county also have this kind of gender sensitive labels? | dcb