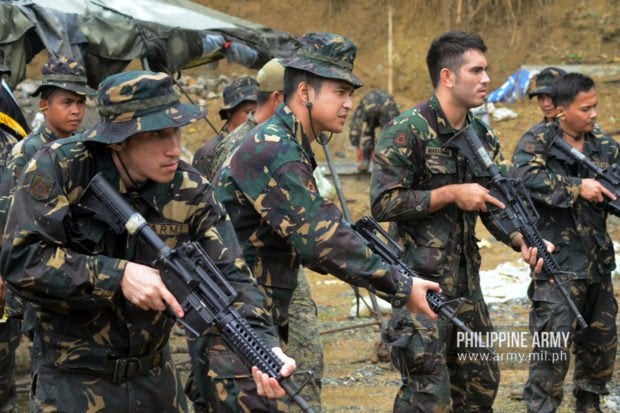 Photo from the Philippine Army

MANILA, Philippines — The Philippine Army is seeking to inspire the youth to volunteer for the armed forces by enlisting celebrities.

After actor-athlete Matteo Guidicelli finished a month-long orientation course with the Army’s Scout Rangers in June, a few more actors followed his footsteps.

“These celebrities are volunteers. We all know that the sense of volunteerism and selfless service are scarce nowadays,” said Army spokesman Lt. Col. Ramon Zagala.

“It’s no denying that these artists have a big influence (on) our youth,” he added.

The enlistment of celebrities, however, has also drawn flak as critics pointed out that these personalities took shorter courses than the originally required for an ordinary reservist.

But Zagala said these actors, who currently have busy schedules, will continuously undergo training until it is finished.

“When we opened our doors, we wanted to make sure that they passed through the process. So we understand that their time is limited and that they have shooting at the moment,” he said.

“But their enthusiasm is very present, so we initiated training for them. Yung training nila is ongoing and continuous until they finish the program of instruction,” he added.

“The adjustment will be on the time they are available… but they will finish the program,” the spokesman pointed out.

These celebrities, he said, can be used as “role models” for the youth to instill patriotism and raise awareness among the youth on the role of the armed forces.

“We all know ‘pag ang artista ay patriotic, purveyor of selfless service, marami ang nagfa-follow sa kanya. So we saw that these artists can be good role models… With that, their fans who follow them will follow suit, that they too will become patriotic, and they too would love their country and give selfless service,” Zagala said. /kga