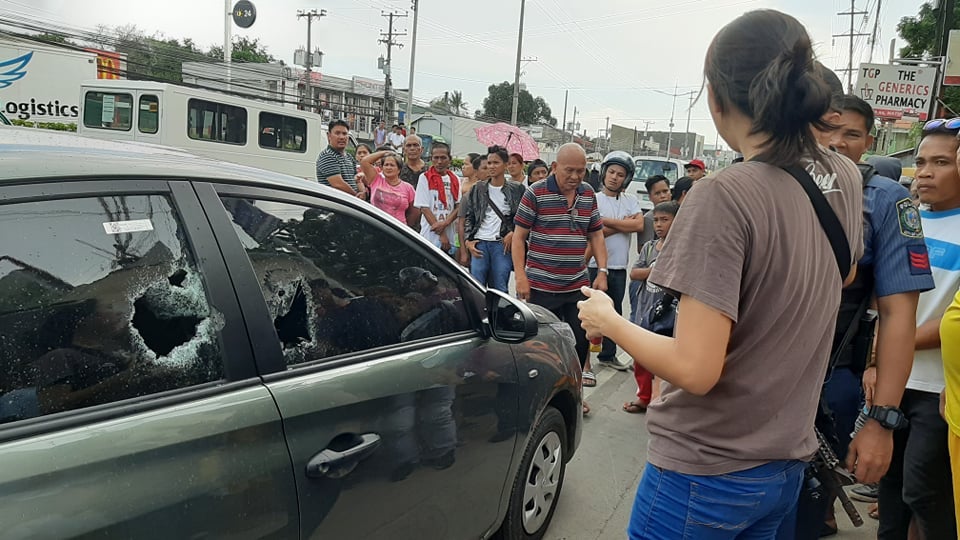 Bullet holes are seen on the windows of the car that the victims were riding on when they were ambushed by motorcycle riding gunmen along the national highway in Barangay Pajo, Lapu-Lapu City. | Contributed photo

Police Master Sergeant Rudy Janagap, Police Station 3 (Gun-ob) investigator, said that the unidentified gunman, who was the backrider of the motorcycle, did not stop firing at the front passenger seat of the vehicle where Querubin was seated until they were at least 20 meters away from the car.

According to initial investigation, Janagap said that Querubin, who was accompanied by his two sisters, had just came from the Lapu-Lapu City Hall of Justice where they attended a court hearing on a drug possession case that Querubin was facing.

They were ambushed by the motorcycle-riding assailants when they reached M.L. Quezon National Highway in front of a mall in Barangay Pajo at 2:15 p.m.

Janagap said that two men on a motorcycle passed on the right side of the vehicle and the backrider then started firing at the passenger’s side where Querubin was seated.

The assailants then fled south in the general direction of Barangay Poblacion.

Police and medical personnel, who arrived in the area, rushed Querubin and Costabella to the hospital.

Querubin, who was hit in the head and body, was declared dead on arrival by doctors at the Lapu-Lapu City Hospital. Costabella survived and was admitted at the hospital for treatment.

Police recovered two empty shells of a 9 mm pistol and a slug of a .45 caliber pistol.

He said that they did not find more empty shells because he claimed that bystanders had picked them up.

Janagap said that they were still investigating the motive of the crime because it was still “too early to establish.”

He, however, said that they were considering his involvement in illegal drugs as one of the angles they were investigating.

Janagap said the drug angle was being looked into because Querubin was allegedly arrested in a buy-bust operation in Sitio Kasamahan, Barangay Poblacion last August 1, but he was able to post bail on August 4.

Janagap said that they would ask nearby establishments near the crime scene to provide them footage of security cameras of the attack./dbs