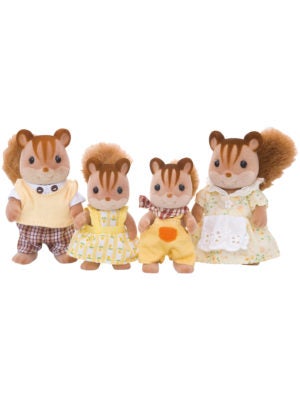 Visit The SM Store in SM City Cebu and enjoy a whole lot of fun and exciting activities for your kids on August 31, September 1, 7 & 8.

Meet & greet these adorable distinctive animal characters with charming and beautiful homes – the Sylvanian families, on August 31 at 1PM & 5PM, and on September 1 at 1PM at the SM Store in SM City Cebu.

At the beginning of production, on March 20, 1985, Sylvanian Families were created and released in Japan by Epoch, which uses the concept of dollhouses and anthropomorphic animal figures. The first releases of the dollhouses and other playsets were made of porcelain and the furniture was made of wood. However, later releases replaced the materials with plastic and metal in the production. The characters, grouped into families, originally depicted typical woodland creatures such as rabbits, squirrels, bears, beavers, hedgehogs, foxes, deer, owls, raccoons, otters, skunks and mice, and later expanded to other animals such as cats, dogs, hamsters, guinea pigs, penguins, monkeys, cows, sheep, pigs, elephants, pandas, kangaroos, koalas and meerkats.

Don’t miss the Beyblade tournament on August 31, September 1, 7 & 8 from 3PM to 5PM. Registration starts at 10:30AM. Beyblade (a single Beyblade is sometimes abbreviated to Bey) is a line of spinning top toys originally developed and manufactured by Takara Tomy, first released in Japan on J