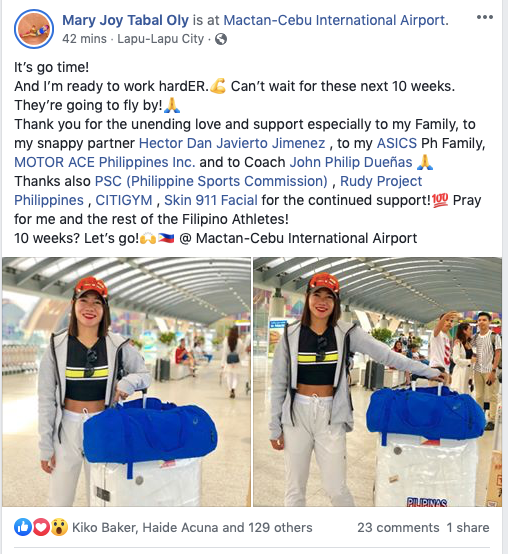 CEBU CITY, Philippines—Cebu Marathon Queen and Olympian Mary Joy Tabal left for Japan on Wednesday morning, September 4, 2019, for  the next phase of her training at the Nippon Sports Science University in Yokohama.

According to her long-time coach John Philip Dueñas, Tabal is returning to Japan for her tempo running training until the first week of November.

“More on tempo running ‘coz we started here with the endurance run training,” said Dueñas.  “[Her training] in Japan [will be] more on proper training of the marathon race pace.”

Dueñas, a level II International Association of Athletics Federations (IAAF) coach, said that Tabal’s Japan training this time will be focused on her stint in the upcoming 30th Southeast Asian Games, which the Philippines will be hosting from November 30 to December 11.

“It’s go time! And I’m ready to work harder. Can’t wait for these next 10 weeks,”  Tabal said in a post in her Facebook page.

Tabal gave the Philippines its first gold medal in the 2017 edition of the biennial meet which was held in Kuala Lumpur. She clocked 2:48:26.

She was seven minutes ahead of Hoang Thi Thanh of Vietnam, who bagged the silver and just short of 10 minutes ahead of Natthaya Thanaronnawat, the 2015 gold medalist from Thailand, who settled for bronze.

While in Japan, Dueñas said he plans for Tabal to join a 21-kilometer or 30-km race to achieve a trial run evaluation.

Tabal will first return to Cebu for lab tests in November before joining the rest of the Philippine Team in Manila. /bmjo