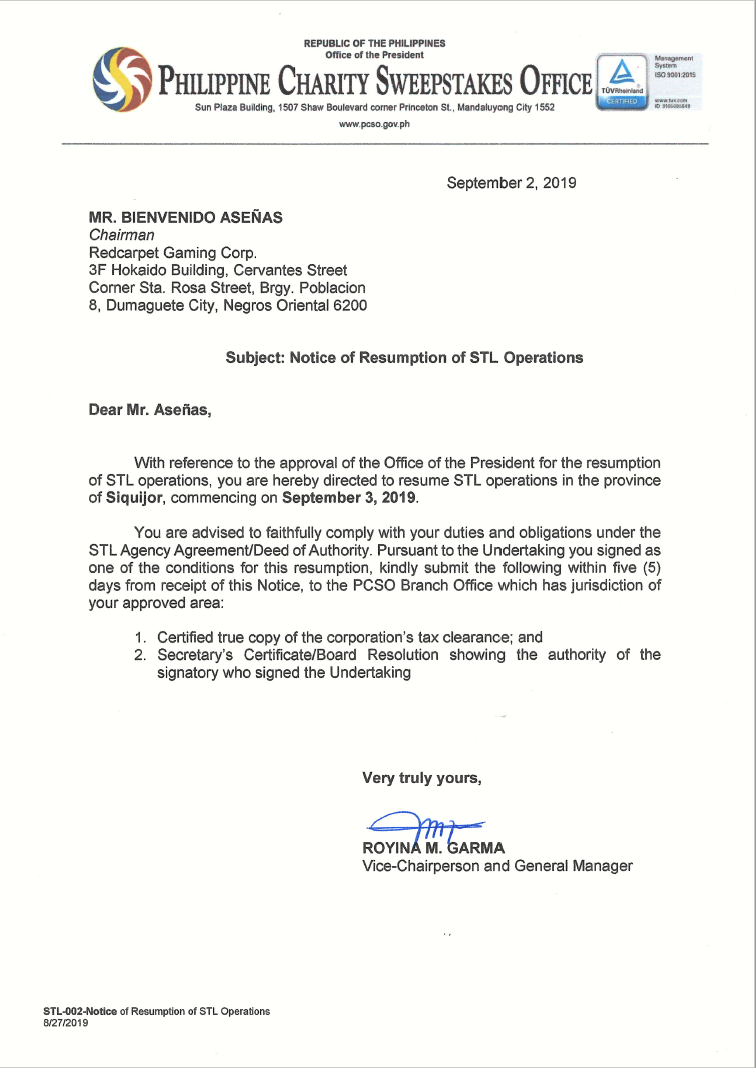 CEBU CITY, Philippines — Philippine Charity Sweepstakes Office (PCSO) has added Siquijor province among the areas in Central Visayas that have been allowed to resume the operation of Small Town Lottery (STL).

It was reported earlier that there were only three areas in Central Visayas permitted by PCSO to operate on STL, namely, Lapu-lapu City, Mandaue City and Negros Oriental.

However, Redcarpet Gaming Corporation, the STL operator in Siquijor, already received a letter from PCSO last September 2, 2019, allowing them to resume their operation. The letter was signed by PCSO Vice Chairperson and General Manager Royina Garma.

Bernice Elmaco, corporate secretary of the Redcarpet Gaming Corporation, told CDN Digital on Wednesday, September 11, that they have resumed operation on September 3 after receiving the authorization from PCSO.

In a text message to CDN Digital at 7 p.m. today, September 11, Police Brigadier General Debold Sinas, Police Regional Office in Central Visayas (PRO-7) said PCSO has notified him this morning, September 11, about the lifting of the suspension of Siquijor’s STL operation.

Last Tuesday, Sinas said in a press briefing that only Mandaue City, Lapu-lapu City and Negros Oriental were allowed by PCSO to resume their STL operation.

President Rodrigo Duterte suspended the operation of  lotto and STL on July 27 due to alleged massive corruption in PCSO. He lifted the lotto suspension a few days later but STL remained suspended until such as time that they are allowed to resume operation by PCSO.  /elb