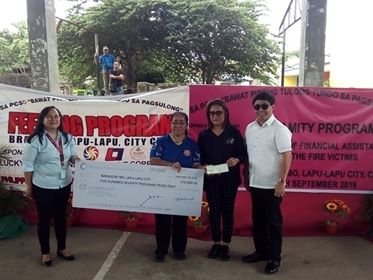 The cash assistance, amounting to P570,000, was turned over by Garma to the fire victims represented by Mayor Junard “Ahong” Chan and Ibo Barangay Captain Josephine Cahilog in simple ceremony at the barangay’s gymnasium.

Garma, in a speech, said she hoped that the assistance would be used by the fire victims to start building their new houses.

Chan thanked PCSO for the assistance, as it would be a big help for the fire victims in their rebuilding process.

According to Chan, the fire site has been re-blocked and reallocated to the affected residents.  There were 150 houses that were razed by fire at Sitio Tacan of Barangay Ibo in July of this year./elb