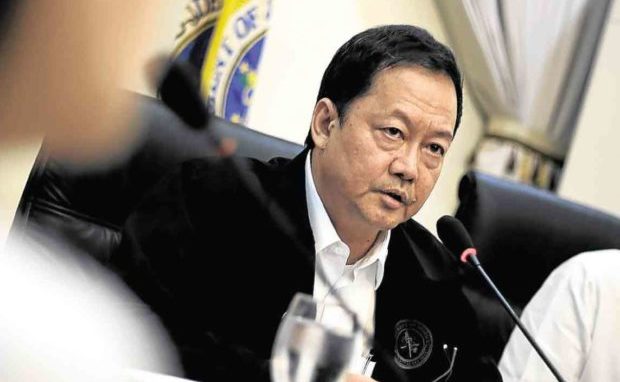 MANILA, Philippines — Justice Secretary Menardo Guevarra has ordered the immediate release of more than 300 freed convicts who earlier turned themselves in even if they were not the subject of the manhunt that President Rodrigo Duterte had ordered.

Guevarra reiterated that authorities were only after prisoners sentenced to life imprisonment for heinous crimes who were prematurely freed by the Bureau of Corrections (BuCor) from New Bilibid Prison in Muntinlupa City and other penal colonies due to good conduct time allowance (GCTA).

As of Sept. 23, the Department of Justice (DOJ) said the BuCor has already taken custody of 2,221 released prisoners, or 307 more than the 1,914 heinous crime convicts who were unlawfully freed for “good conduct.”

“[Freed convicts] who should not have surrendered must be released immediately,” Guevarra told reporters on Monday night.

“They did not commit heinous crimes that’s why they were not included. We are still evaluating the remaining ‘persons of interest’ that the police should locate,” he said.

Asked why prisoners who were not convicted for heinous crimes decided to yield to the police and the BuCor, Guevarra said they had yet to interview them.

“But I suppose [they surrendered] out of fear. Or maybe they respect the authority of the President. That’s also a possible explanation,” he said.

“But primarily, I guess the fear that something may happen to them if they don’t surrender voluntarily [was the main reason],” he added.

An irate President did not hide his disappointment over the early release of Bilibid prisoners sentenced for life for committing serious crimes, including drug lords, prompting him to sack Nicanor Faeldon, as BuCor chief.

The President then ordered the freed convicts to surrender within 15 days and offered reward money for the arrest of those who refused to yield.

Guevarra said the DOJ and BuCor were now reviewing the list of Bilibid convicts who sought to be released ahead of the completion of their jail terms for good behavior.

The justice secretary had suspended the processing of applications for GCTA of prisoners after former Mayor Antonio Sanchez of Calauan, Laguna, was nearly discharged from the Bilibid last month.