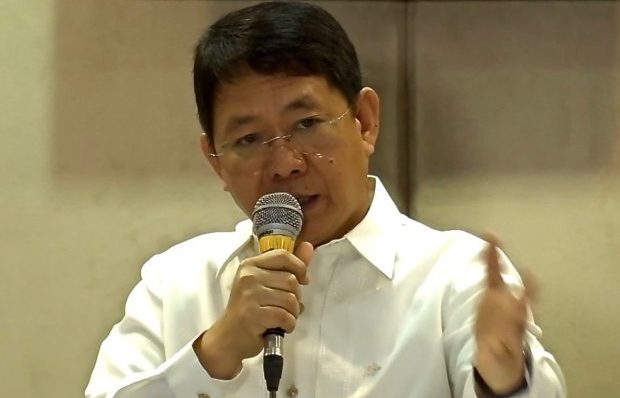 MANILA, Philippines — The Department of the Interior and Local Government (DILG) has started investigating the pilfering of confiscated illegal drugs by rogue policemen and the alleged coddling of involved officers by Philippine National Police chief Gen. Oscar Albayalde when he was the Pampanga police director in 2013.

Speaking to reporters on the sidelines of President Rodrigo Duterte’s meeting with the Filipino community in Moscow on Saturday night, Interior Secretary Eduardo Año said the DILG, which oversees the PNP, began the investigation without waiting for the Senate to complete its inquiry into the “ninja cop” racket.

He said the President was waiting for the results of the investigations before deciding what to do with Albayalde.

“When we return to the Philippines, I will sit down with [National Police Commission] lawyers and the DILG legal service and check the status of the review of the case,” Año said.

The President returned from a five-day visit to Russia on Sunday amid calls for the resignation of Albayalde, who, according to Sen. Richard Gordon, chair of the Senate investigative panel, is guilty “at the very least of negligence” in the pilferage of a substantial amount of drugs seized by policemen under his command when he was Pampanga provincial police chief.

Speaking to reporters after his arrival in Davao City, the President said Albayalde, like common criminals, enjoyed the presumption of innocence until proven guilty.

“I have to follow procedural due process. And allow in time to answer. The right to be heard. It’s given to the criminals, to the kidnappers. It should be given to a general of the PNP,” the President said.

He said he must tread carefully before deciding what to do with Albayalde, noting that nothing had turned up directly linking the PNP chief to the ninja cop racket.

He said Año would study the case “very carefully.”

The President went on to say that he could not sack Albayalde just because there were claims that the PNP chief intervened to stop the dismissal of 13 policemen involved in the Pampanga drug operation.

“Just because he called up someone?” the President said, referring to Philippine Drug Enforcement Agency chief Aaron Aquino, who confirmed at a Senate hearing last week that Albayalde phoned him to ask him not to implement an order for the dismissal of the officers.

“I could not do it in a knee jerk. There is a legal maxim that which we have to follow. Guilt is personal. That is the problem. That is why you have to hear before you condemn,” he said.

Vow to wipe out ninja cops

During his meeting with Filipinos in Moscow, the President vowed to deal harshly with policemen involved in the illegal drug trade.

“I have ninja [cops] now. When I get home I will take down these sons of bitches,” he said. “They are called ninja. These stupid people are really into drugs.”

The President said he had directed Año to investigate, and promised to “wipe out the sons of bitches” by the end of his term.

At a forum with Russian President Vladimir Putin, Jordanian King Abdullah II and the presidents of Azerbaijan and Kazakhstan in the resort city of Sochi on Thursday, President Duterte mentioned that two generals were “playing with drugs.”

In his talk with reporters on Saturday, Año said he had yet to talk with the President about the two generals.

The PNP said on Sunday that it was open to an investigation concerning the two generals.

Brig. Gen. Bernard Banac, the PNP spokesperson, said in a statement that the PNP had no information about high-ranking officials involved in the narcotics trade.

The PNP, however, is “ready to face any hearing or investigation that will be conducted to shed light on reports that there are two police generals involved in illegal drugs,” Banac said.

In his talk with reporters on Sunday, the President clarified that the two officers were actually colonels, not generals.

“No generals, two colonels,” he said, explaining that ranks in the police were confusing.

The Department of Justice (DOJ) is reviewing the ninja cop case that has clouded Albayalde’s record just weeks before he retires from the service.

Justice Secretary Menardo Guevarra said on Sunday that the DOJ, “in the interest of justice,” would reopen the case of Police Maj. Rodney Baloyo and 12 other policemen involved in the Pampanga operation.

Guevarra said a new panel of state prosecutors would be formed to conduct the review.

“Both sides will be given ample opportunity to present additional evidence,” Guevarra said.

The DOJ will try to resolve the case in a month’s time, he said, adding that the review has been pending since 2017.

Baloyo is detained in New Bilibid Prison, sent there last week by the Senate for lying to the inquiry headed by Gordon and giving evasive answers to the senators’ questions.

Baloyo was chief of the Pampanga police intelligence branch whose agents conducted the drug operation in Mexico town in November 2013 that netted 200 kilos of “shabu” (crystal meth), but turned over only 38 kilos.

Baguio City Mayor Benjamin Magalong, who had investigated the case when he was chief of police criminal investigation, told the Senate inquiry that Albayalde missed the red flags and later phoned Aquino to ask that an order for the dismissal of Baloyo and the other policemen not be implemented.

Vice President Leni Robredo on Sunday expressed hope that Magalong’s testimony would add power to the PNP’s drive to cleanse its ranks of rogue officers.

“The challenge is [to] the leadership. How they will respond given this kind of evidence,” Robredo told reporters in Naga City.—Reports from Dona Z. Pazzibugan, Julie M. Aurelio, Tina G. Santos, Jeannette I. Andrade, Germilina Roque and Jhesset O. Enano