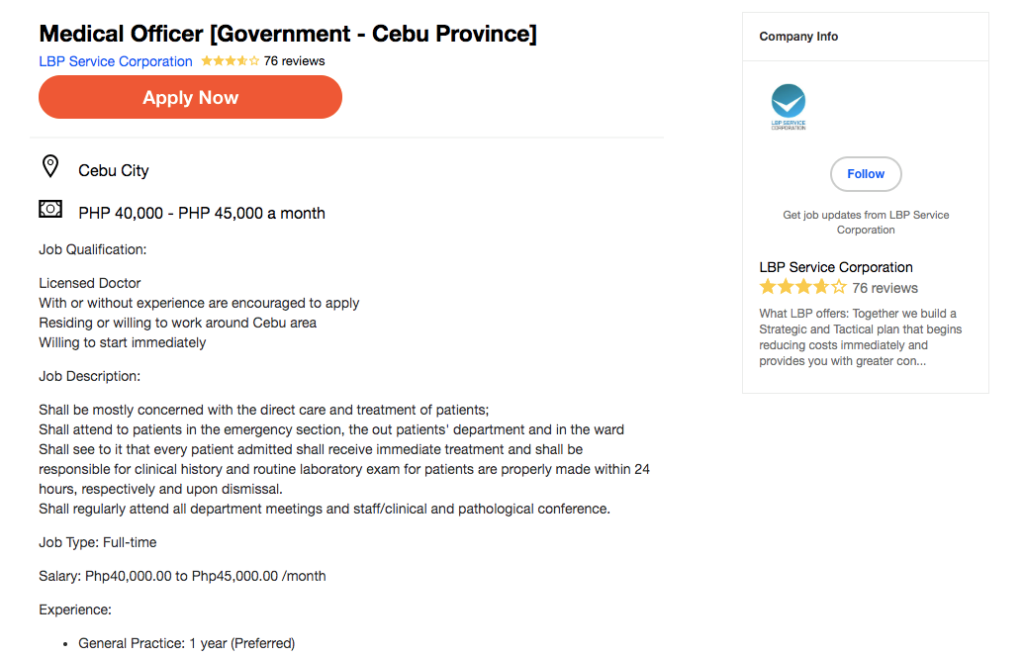 This is a screenshot of LBP Service Corporation’s job posting as of 9 a.m. on Thursday, October 10.

CEBU CITY, Philippines — Is the manpower agency that won P258-million in government contracts for the supply of medical and clerical personnel to various hospitals in Cebu province having a hard time hiring people?

LBP Service Corporation (LBP), the Manila-based agency that won the bid to provide medical and clerical personnel on behalf of the Capitol, posted job openings for warehouseman, nurses, doctors, and medical specialists in at least three online job portals recently.

The job advertisements indicated that the personnel will be deployed in Cebu Province.

The warehouseman post was advertised 30 days ago, September 10, or before their service term with the Capitol officially started last October 1.

But the time stamps for the job ads on the medical personnel for the 12 districts and four provincial hospitals shows that the company is still looking for staff 21 hours ago as of  9 a.m. of Thursday, October 10. 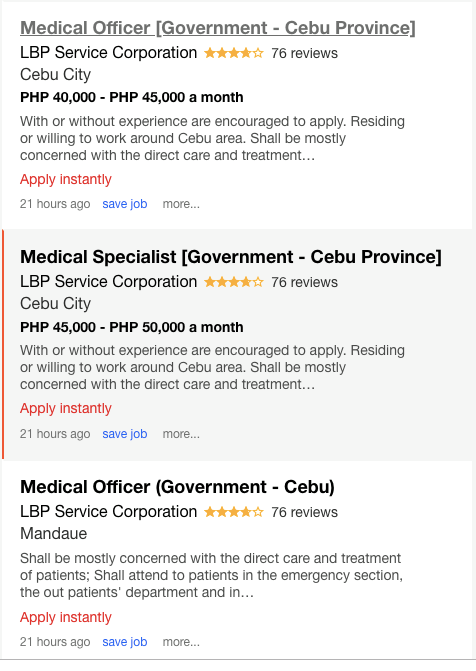 LBP Service Corporation, the Capitol’s supplier for medical and clerical personnel need, is still hiring staff. This screenshot was taken at 9 a.m. on Thursday, October 10.

The medical personnel will be deployed to the province-run hospitals and the health units of the Provincial Health Office (PHO).

The clerical staff will be assigned to other offices.

According to the job listings, LBP is offering P40,000 to P45,000 as basic salary for licensed doctors who will be assigned in Daanbantayan, Boco, Sogod, Danao, Bantayan, Minglanilla, Carcar, Argao, Oslob, Tuburan, Pinamungajan, Barili, Badian, Malabuyoc, Camotes, and Cebu City.

However, it was not indicated how many job openings are available.

In the listing, LBP said candidates “with or without experience are encouraged to apply” as long as they are residing or willing to work around Cebu and are willing to start immediately.

For the medical specialist post, LBP is offering P45,000 to P50,000 basic salary to successful applicants.

LBP preferred candidates with at least one year of practice but those without experience are still encouraged to apply.

When they started supplying medical and office staff last October 1, LBP had the option to absorb the existing Job Order employees based on the recommendation of their respective department heads.

Some doctors in the province-run hospitals, however, opted to discontinue their service because of “employment issues.”

Last October 2, Argao town’s Isidro C. Kintanar Memorial Hospital emergency room reportedly shut down for hours after a medical officer tendered her resignation and “walked out” amid the outsourcing scheme.

The Capitol resorted to the outsourcing of personnel to ensure that all posts in the offices and hospitals are filled up.

This means that whenever outsourced personnel did not report to work, LBP is required to send in a replacement in order to ensure the smooth flow of operations in the province-owned hospitals. / celr