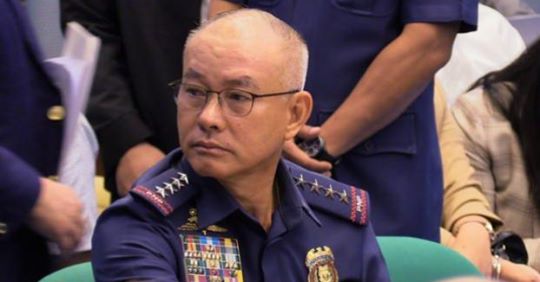 MANILA, Philippines — President Rodrigo Duterte may choose from among the three of the most senior officials of the Philippine National Police as the successor of outgoing PNP chief Oscar Albayalde, Sen. Bong Go said on Friday.

At the same time, the senator said Albayalde, who is still reeling from his alleged links to “ninja cops,” would have to relinquish his post on Oct. 29, more than a week ahead of his mandatory retirement on Nov. 8.

Albayalde had been at the center of the Senate inquiry into the modus of ninja cops, a police term that refers to law enforcers who pilfer and sell illegal drugs seized during legitimate operations.

Go, Mr. Duterte’s former aide, said the President opted to hold the turnover ceremony for the next head of the 190,000-strong force earlier as he would fly to Bangkok in the first week of November to attend the Association of Southeast Asian Nations Summit.

Gamboa is currently the PNP’s No. 3 man as deputy chief for operations while Cascolan is the fourth as the chief of the PNP directorial staff.

Cascolan and Gamboa, “mistah” (classmates) of Albayalde in Philippine Military Academy (PMA) Class 1986, were both known to have close ties with Mr. Duterte.

Eleazar, who belongs to PMA Class 1987, is said to be a “dark horse” after making his mark in his yearlong stint as head of the National Capital Region Police Office.

“It’s important [that the next PNP chief has the] trust and confidence [of the President] and that he can unite and continue the internal cleansing in the PNP,” Go told reporters after visiting residents displaced by fire in Sta. Ana, Manila.

Senate President Vicente Sotto III on Friday played down the claim of the beleaguered PNP chief that the retired police generals who had testified in the Senate hearing on the ninja cops racket were conspiring against him since they all served under the previous Aquino administration.

Sen. Panfilo Lacson, a former PNP chief, warned Albayalde that his plan to sue the former police officials who had linked him to the irregular antidrug operation in Pampanga six years ago, might just boomerang on him.

Besides, Lacson said pursuing cases against the witnesses would require Albayalde to “present solid evidence to disprove the accusations hurled against him.”

The probe spun off from the initial investigation on the unlawful early release of heinous crime convicts from New Bilibid Prison of the Senate blue ribbon and justice committees, both chaired by Sen. Richard Gordon.

Magalong had accused Albayalde of calling Aquino to intervene in the dismissal order against 13 of the PNP chief’s former subordinates led by then Supt. Rodney Baloyo who carried out the anomalous drug sting.

Magalong, who investigated the Nov. 29, 2013, operation as head of the Criminal Investigation and Detection Group, revealed that Baloyo’s group recovered about 200 kilograms of shabu (crystal meth), but only declared seizing only 38 kg.

In a stunning revelation, Lacadin said at the resumption of the Senate investigation on Thursday that Albayalde had admitted to him that he earned “only a little” from the drug pilferage modus of Baloyo and his men.

Meanwhile, a major revamp of the leadership of the PNP starts on Saturday.

The revamp was caused by the retirement of Lt. Gen. Fernando Mendez, and has nothing to do with the controversies surrounding Albayalde, PNP spokesperson Police Brig. Gen. Bernard Banac said in a statement.

Gamboa will be replaced by Cascolan, chief of the PNP directorial staff, while Eleazar, chief of the NCRPO will replace Cascolan.

No immediate successor for Sinas was named.