WATCH: These three elderly women are so into Kadenang Ginto 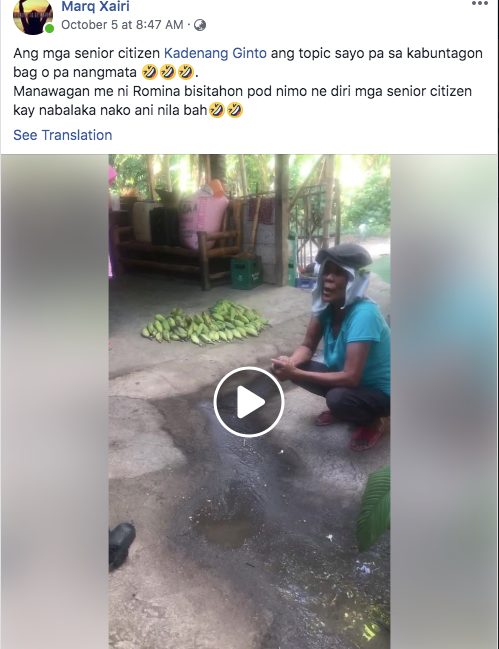 CEBU CITY, Philippines— Mornings are best spent with a good cup of coffee and bit of that tasty breakfast food.

A little chit chat could make it better.

Just as in the case of these elderly women, who were filmed having a good talk about an afternoon television series titled Kadenang Ginto.

Apparently, the video of the three is making rounds on social media.

It was netizen Irish Marquez, 32, an overseas Filipino worker from Davao del Sur, who shared the video of this interesting conversation between three elderly women about their thoughts about the popular series.

This recorded discussion happened early morning on October 5, 2019 in front of the store of Marquez’s sister in Davao del Sur.

All three seem to have their own thoughts about what’s going to happen next in the series.

Irish brings us back to when this conversation happened.

“While I was drinking coffee early morning around 7 a.m., this group of elderly women came to my sister’s store and talked about Kadenang Ginto. I was amused because they are very serious about it. They didn’t have any idea that I was taking the video,” says Irish.

But what did the three feel once they knew they were in the video that was posted on social media?

“They were happy when they found out that a lot of people watched it,” Irish added.

According to Irish, these women love Kadenang Ginto so much that one of them, Lola Narcing, did not go to the beach with her family that day because she wouldn’t want to miss an episode of her favorite afternoon drama series.

It seemed to have been worth it. Since the video’s uploading, the women in the video has been receiving a lot of praise online.

Who would have thought a little morning chit chat would go viral? /bmjo