UC’s African student-athlete on sharing talent to Cebu’s kids: It was great putting a smile on those kids’ faces 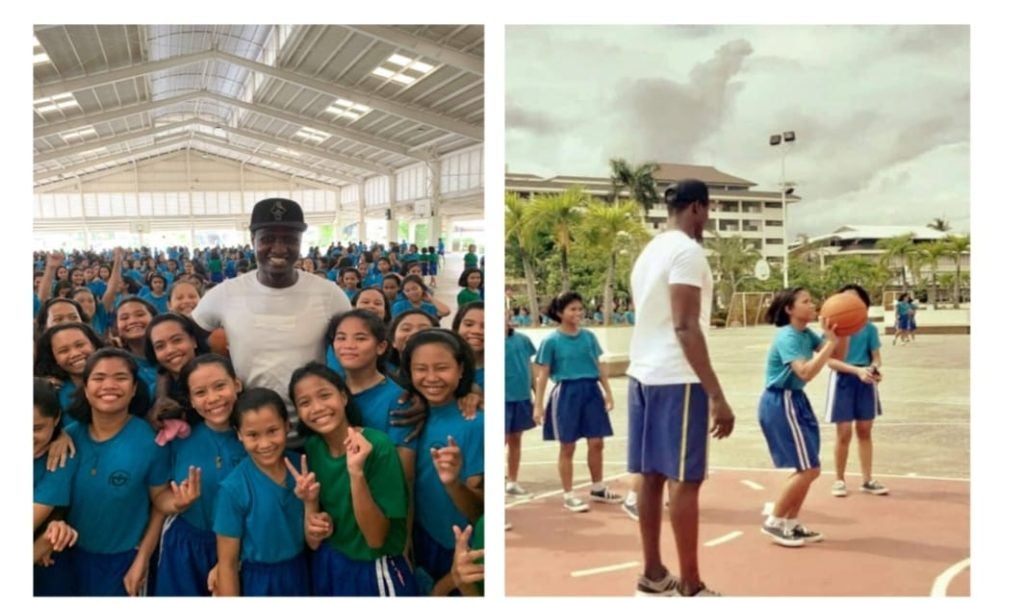 UC’s Tosh Sesay shares photos of him with the kids of SMS-Girlstown. | contributed photo

CEBU CITY, Philippines—University of Cebu’s foreign student athlete Mohamed Tosh Sesay is having a blast in his stint with the Webmasters in the Cebu Schools Athletics Foundation Inc. (Cesafi) men’s basketball tournament.

He’s not just having fun in Cebu’s top hoops league.

The 22-year-old, 6-foot-9 player from Sierra Leone in West Africa is also busy sharing his talent with the young aspiring basketball players of Cebu.

In fact, the UC center paid a visit to the Sisters of Mary School-Girlstown, Inc. last June 9, 2019 to help young kids learn the sport. The African-student athlete told CDN Digital that this outreach experience in Cebu gave him more strength to be the bearer of hope to the younger generation.

“My best moments were me teaching these young and beautiful girls how to play basketball. The other great moment was when they were asking me all kinds of questions about Africa,” says Sesay.

But it’s not only now that big man has done this good deed. Sesay shared that he has actually  been active in volunteering in some of their orphanages back home.

“I have been doing this back home with some orphanage home as a volunteer so this is not the first time,” he said.

He also added that it was such a breath of fresh air for him, especially since he has been training for this season’s basketball games during that visit.

“It was great seeing me put a smile on those kids’ faces. It makes me feel happy and joy. The environment was very nice,” says Sesay.

Hanna Mae Panlaan, Sports Coordinator of Sisters of Mary School-Girlstown, told CDN Digital that the Webmasters paid them a visit as part of the team’s outreach program.

“The team was scattered and was given their own teams to talk about basketball. The workshop was participated by students who were grades 7 and 8 students,” says Panlaan.

Panlaan told CDN Digital that it was such a good day for the students to see athletes who served as an inspiration to them.

“They were shocked because the players were so tall, and was amazed that an African was with them. They felt really blessed because the team chose to share their talents and skills with them, making them realize that basketball is fun and easy,” she said. /bmjo

Read Next
Police looking for remaining suspects in mall heist