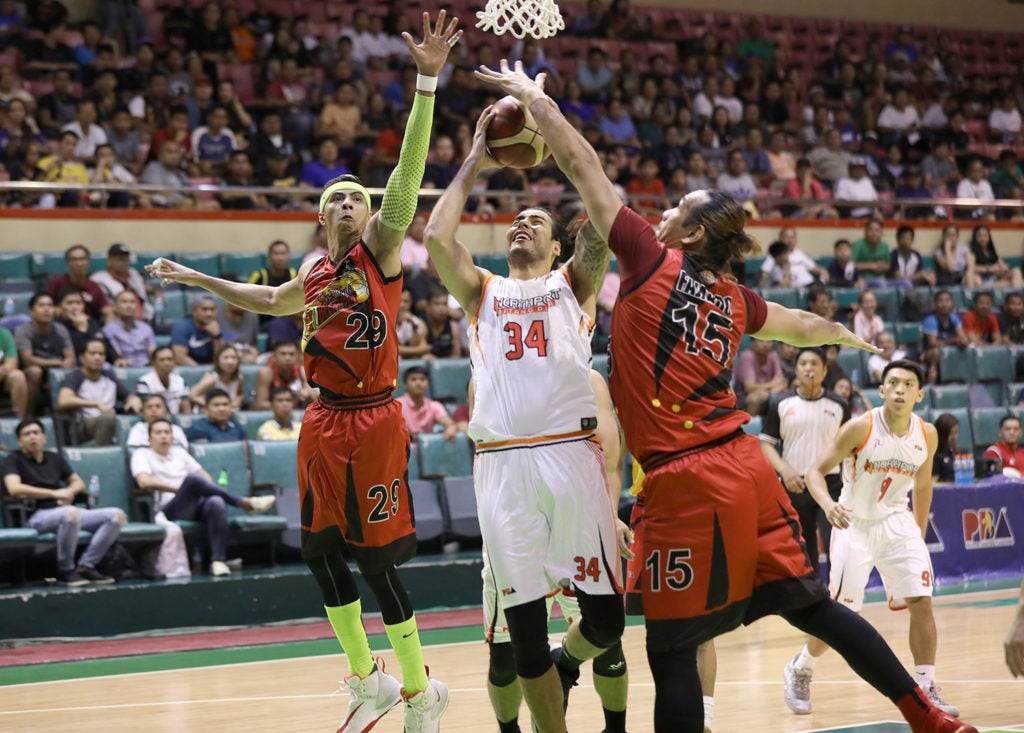 Briefly, drama overtook relevance when Christian Standhardinger stepped into the court as part of the NorthPort starting unit and hugged some of his former San Miguel Beer teammates before tip-off.

Once things got settled, though, basketball—the high-flying, punch-for-punch, crowd-pleasing type—took over.

And the Beermen, with their loaded roster and talented import, normally benefit from that frenetic, high-scoring pace.

The Batang Pier, however, “got lucky,” NorthPort coach Pido Jarencio said with a smile after his wards turned Standhardinger’s first game against his former club into a celebration of sorts by delivering a short but lethal run in the endgame of a 127-119 victory on Wednesday night in the PBA Governors’ Cup at Cuneta Astrodome.

Standhardinger provided more than just an interesting subplot in a match whose hype centered on the new jersey he slipped on. He also delivered the dagger in that game-ending 10-2 exchange—a basket that gave NorthPort a 124-117 lead with 1:01 remaining.

“Christian did his share,” said Jarencio of the big man who finished with 18 points and seven assists for NorthPort.

And he wasn’t alone.

Nico Elorde, Jervy Cruz and Kevin Ferrer and new import Michael Qualls also contributed to handing NorthPort its third win in seven games. The Batang Pier needed every contribution they could squeeze out from their bench, especially with Beermen import Dez Wells erupting for 56 points to go with eight rebounds and nine assists.

“At least for now, we are currently inside the circle of teams that will make the playoffs. Had we lost, we would have joined teams at the bottom at 2-5 [win-loss],” Jarencio said.

While Jarencio and the Batang Pier were glad to stay away from having to slosh around in the conference sewers, Rain or Shine felt fortunate to just being able to drag Blackwater there to join them after a 99-82 victory in the earlier game.

“We finally hit some shots tonight, even if some of them were lucky ones,” said Painters coach Caloy Garcia, whose wards snapped a four-game slide and collected their second win in seven games.

The biggest shot—and probably the one that needed a dose of good fortune—came from import Kwame Alexander, who drained a tough, challenged triple under shot clock pressure after a series of muffed attempts from the Elite to kick off a 15-1 finishing run that allowed Rain or Shine to peel away from a tight three-point contest.

“You can see that our rotation is better [with Alexander],” said Garcia of his new import, who seemed to hobble his way to the finish for most of the second half.

Alexander still finished with 17 points and 16 rebounds for Rain or Shine.

The win slightly propped up a shaky playoff bid by the Painters—but just barely. At 2-5, the Painters and the Elite are just a step ahead of idle bottom-dweller Alaska’s 1-6 record.

The Elite certainly posed a big challenge for the Painters with a strong start, largely through the efforts of rookie Ray Parks Jr., who “played like an import,” according to Garcia.