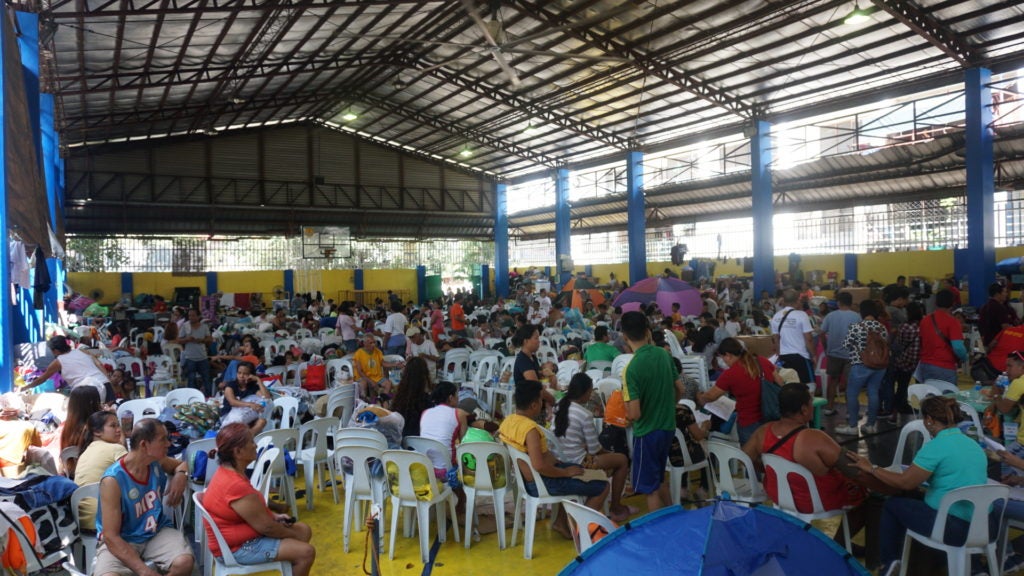 Pacayde, 44, was one of the hundreds of individuals who now occupy the sports complex after fire burned their homes in Sitio Panting in Barangay San Roque, Cebu City on Sunday afternoon.

Pacayde is asking the city government to speed up the clearing of the fire site so they could already start to rebuild their burnt homes and start anew.

Alvin, 64, and Genda, 60, said they already wanted to return to the comforts of their own home before the Christimas holidays.

But they expressed fear that they will have to spend more time at the sports complex especially since the Cebu City government have not even started the distribution of housing materials for the fire-affected families.

(Our only appeal is for us to be allowed to rebuild our homes because our stay at the evacuation center is very difficult.)

Like the rest of the fire victims, the Hinayon couple also sleep on the sports complex’s cemented floor at night.

Pacayde said that he can’t stay at the sports complex longer because he had to return to his work as a private security personnel.  He needed a secure place where he can leave the belongings which he saved from the fire.

He also needed a place for his wife, 14-year-old daughter, and seven relatives to stay.

Mayor Edgardo Labella wants reblocking implemented at the fire site before fire victims would be allowed to rebuild their homes to especially restore the 20 meter easement, in compliance with law.

As of 5 p.m. today, November 4, the Department of Social Welfare and Services (DSWS) has accounted for 116 fire-affected homes.  They also listed a total of 216 fire-affected families consisting of 960 individuals.

However, Jeffrey Ibones, DSWS head, said they continue to do their validation works to determine how many of the fire-affected homes were totally burned and how many were partially damaged.

The city government is giving out cash assistance of P20, 000 to house owners while renters will get P10, 000 each.

Meanwhile, Senior Fire Officer 3 (SFO3) Lowel Opolentisima of the City Fire Department said they continue to investigate the cause of the Sunday afternoon fire. / dcb