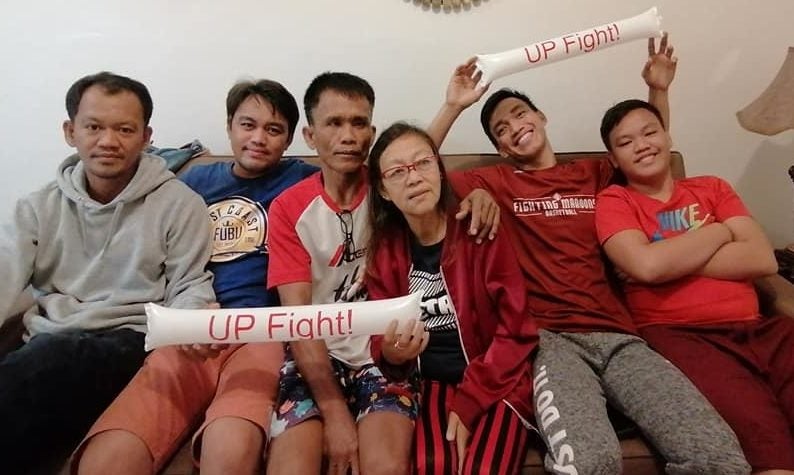 CEBU CITY, Philippines—It is a given that family is an athlete’s biggest supporter.

Cebuano cager Jaybie Mantilla was reminded of this just recently when his entire family from Cebu flew to Manila to cheer for him as the University of the Philippines (UP) faced the University of Santo Tomas (UST) in a UAAP men’s basketball semifinal game last Sunday, November 10, 2019, at the Araneta Coliseum.

Although the Fighting Maroons got beaten by the Growling Tigers, 89-69, Mantilla still felt like a winner, knowing his family travelled–at their own expense–all the way from the Queen City of the South to the nation’s capital to watch him play live in the UAAP.

Mantilla, a former Cebu Schools Athletics Foundation Inc. (Cesafi) Most Valuable Player who played for the University of San Jose-Recoletos (USJ-R) Jaguars, told CDN Digital that it was supposed to be just his mom and dad who’d watch him play in the crucial game. He was shocked when he saw his three brothers come too.

Read: Mantilla shares experience of playing for the UP Fighting Maroons

Read: Cebuano Mantilla on first game with UP: Feels like heaven

Her mom Teresita, 53, is actually undergoing dialysis but still managed to travel just to see her son play live for the Maroons.

(It was always my mom’s dream to ride on an airplane. They also really wanted to watch a UAAP game live.)

But how did the family feel that he saw limited minutes and went scoreless in the game?

According to Mantilla, it didn’t matter for his family since he already told his parents not to expect him to be on the court for the entire game. The point guard from Barangay Suba, Cebu City, said he made his parents understand that all of them in the UP roster have their own roles to play.

Read: Cebuano Mantilla now a champ with UP

(I am just grateful to my coach for trusting me to play, especially during the start of the third quarter, when he let me in to play a defensive role.)

Mantilla, who is on a one-and-done deal in the UAAP,  shared with CDN Digital that the experience is one he will remember for the rest of his life.

(It was really worth it because we had the time to bond and it was our first time to be all together here in Manila.)

Meanwhile, the loss may have been a bitter pill to swallow for the Fighting Maroons, who finished the elimination at no. 2 with a 9-5 (win-loss) record, but Mantilla is confident they can bounce back and return to the finals to face the Ateneo de Manila University Blue Eagles anew.

“I used that last game as our motivation. We still have a chance to bounce back from the previous game,” says Mantilla.

The do-or-die semis game against the Growling Tigers is on Wednesday, November 13, 2019. /bmjo