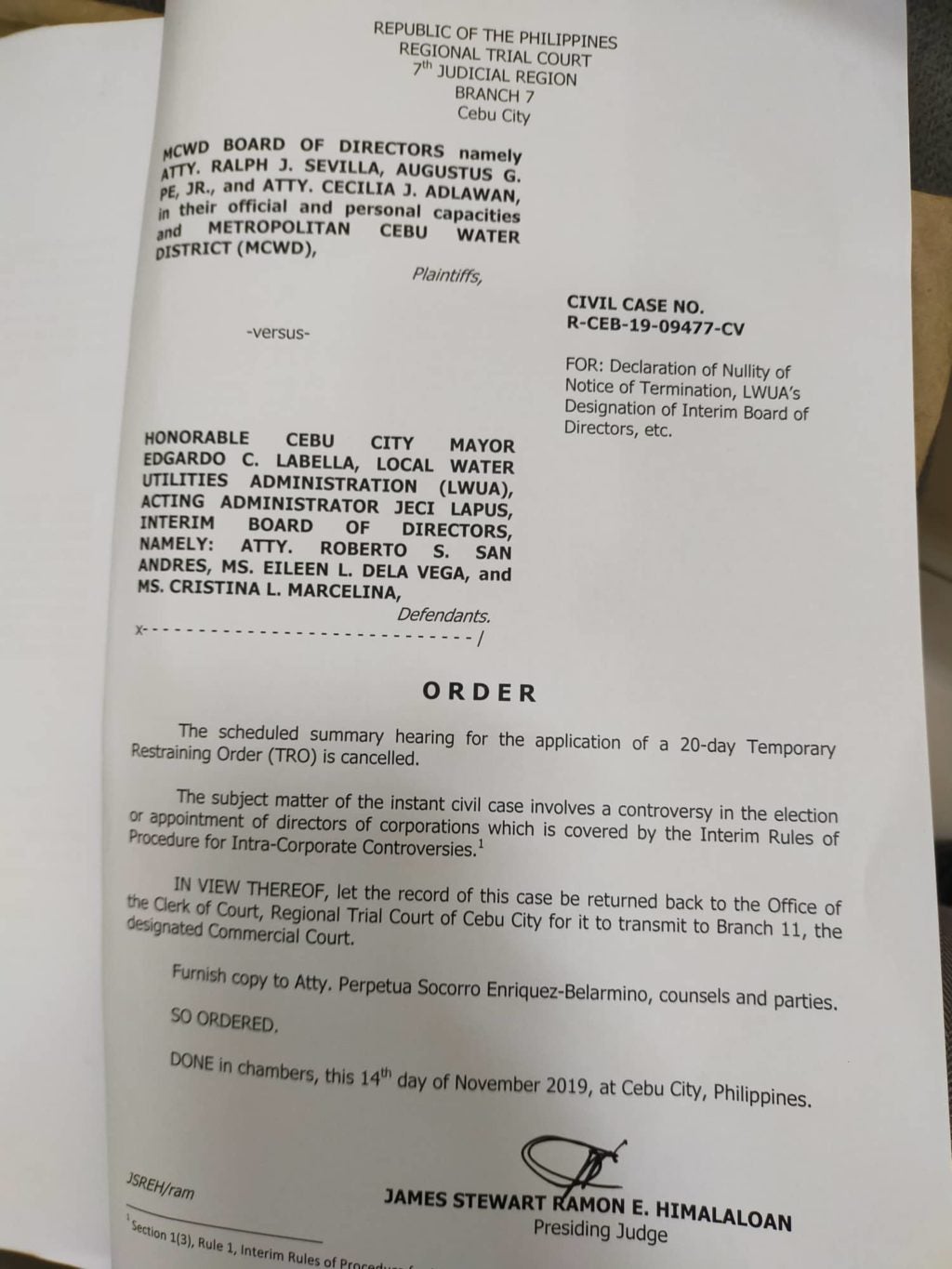 The Regional Trial Court Branch 7 in Cebu City cancelled the hearing for the Metropolitan Cebu Water District’s (MCWD) request for a temporary restraining order over Mayor Edgardo Labella’s termination of its Board of Directors. | Contributed photo

CEBU CITY, Philippines — The Cebu City Regional Trial Court (RTC) Branch 7 has cancelled the summary hearing for the Metropolitan Cebu Water District’s (MCWD) application of a 20-day temporary restraining order (TRO) over the termination of its Board of Directors by Mayor Edgardo Labella.

The summary hearing was scheduled at 2 p.m. at the sala of Judge James Stuart Ramon Himalaloan of Branch 7, but the judge ordered the cancellation on November 14, 2019, after he ruled that the case was filed in the wrong court.

According to the Order released by Himalaloan, the case for the “Declaration of Nullity of Notice of Termination, the Local Water Utilities Board Association’s (LWUA) Designation of Interim Board of Directors, etc.” should have been filed in the Special Commercial Court instead of the Civil Court.

“The subject matter of the instant civil case involves a controversy in the election of appointment of directors of corporation, which is covered by the Interim Rules of Procedure for Intra-Corporate Controversies,” said the Himalaloan in the Order.

The case was returned to Branch 11 after case was filed with the clerk of court, who had raffled it to Branch 7.

City Legal Officer Rey Gealon said they were ready to present their arguments to the court until they received the order of the cancellation.

The counter-statement of the city was already prepared.

“MCWD was wrongly filed before a regular court, instead of a commercial court which is RTC 11. Today is supposed to be the TRO hearing and we are ready with our arguments. We are confident that no TRO will be issued,” said Gealon in a text message to CDN Digital.

Gealon said the case against the city would not take hold as the MCWD Board of Directors did not have the right to any public office as they were appointed by the appointing authority, which is the mayor of Cebu City.

“The Act sought to be enjoined is ‘Fait Accompli’ since they have already been removed and replaced as directors of MCWD,” said Gealon.

He also said granting a TRO or preliminary injunction would amount to a “prejudgement of the main case” which is prohibited by law.

Gealon said the City Legal Office was confident the decision of Labella to terminate the Board of Directors was within the confines of the Presidential Decree 198 or the Provincial Water Utilities Act of 1973.

MCWD is yet to comment on the court’s order as of press time. /dbs