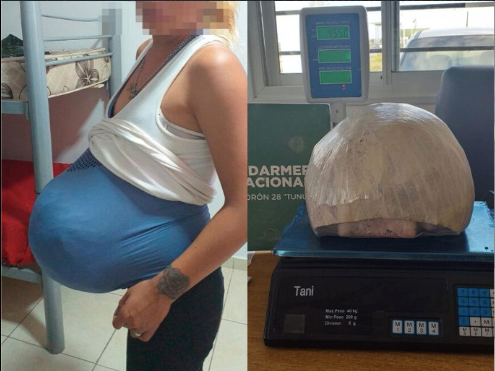 A woman was arrested for wearing a fake baby bump as seen on the Argentine National Gendarmerie’s Twitter post. Image: Twitter/@gendarmeria

Instead of a bundle of joy, a woman was apparently carrying a bundle of narcotics. A drug smuggler wore a fake baby bump to transport over 4 kilograms of cannabis in Argentina last Wednesday, November 13, 2019.

Before she could get far, the fake pregnant woman and her companion were arrested at a police checkpoint in Valle de Unco, near Argentina and Chile’s border, Metro reported on Thursday, Nov. 14.

The woman and her male companion were riding a bus when they were spotted by the authorities. As per report, the two were asked to exit the vehicle after two bricks of cannabis were found in her male companion’s bag.

Upon further inspection, they discovered that the woman’s “bump” was actually 15 bricks of packed cannabis bonded together with a starch-based paste.

The Argentine National Gendarmerie took the narcotics bust on its official Twitter page last Wednesday, Nov. 13, with a link to its report.