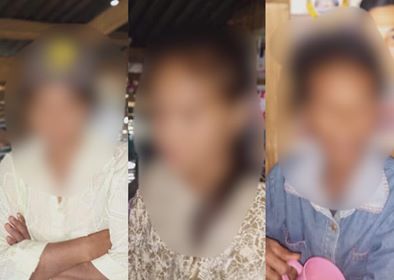 Three of the six suspected female rebels arrested near the site of the firefight between soldiers and suspected New People’s Army in Barangay Cansalugon, Isabela, Negros Occidental on Nov. 22, 2019. |62IB Photo

DUMAGUETE CITY, Negros Oriental – Six women alleged to be members of the New People’s Army were arrested by soldiers from the 62nd Infantry Battalion following a firefight on Friday in a hinterland village of Isabela, Negros Occidental that resulted to the death of a suspected rebel and the wounding of another.

The six women were taken into custody after they were pinpointed as the ones involved in harassing the village chief in Barangay Tinongan of  Isabela, according to Lieutenant Colonel Egberto Dacoscos, commanding officer of the 62nd IB.

During the encounter that happened in Sitio Canlusong of Barangay Cansalugon, Isabela  (not  in Sitio Tambo, Barangay Santol, Binalbagan, Negros Occidental as earlier reported),  one suspected NPA was killed, identified only as alias Dodong/Beboy and a suspected member of the Special Partisan Unit (Sparu) of the NPA. The wounded suspected NPA was identified in a military report as Ernesto Amallo.

The  women, whose names are being withheld by CDN Digital pending verification of their identities, were  arrested in the house located near the encounter site, Dacoscos said in an interview on Saturday, November 23.

He said that five of the women allegedly admitted to be members of the NPA.

“Actually, ang sinasabi nitong apprehended, kasi nagcooperate na, inaamin na nila na sila yung pumasok and nag-intimidate kay kapitan (Actually, those arrested admitted, because they cooperated with us, that they were the ones who went into the house of the barangay captain),” Dacoscos added.

It was the report that suspected rebels  threatened the family of Tinongan Barangay Captain Charlie Zambrona of Tinongan, Isabela last November 20, 2019 at his residence that prompted the military to conduct an operation in the area.

During the operation, the soldiers engaged about 15 armed rebels on an hour and a half gun battle that led to the death of the suspected rebel. No casualty was reported on the government side.

Army soldiers from the 62IB gather in one place clothes and other personal items recovered from a rebel encampment overran by the military following a firefight in Sitio Canlusong, Barangay Cansalugon, Isabela, Negros Occidental on Nov. 22, 2019. |62IB Photo

As of this posting, the slain rebel and the wounded were still being brought down from the mountain barangay while those arrested will be turned over to the Negros Occidental Provincial Police Office (NOCPPO) for the filing of appropriate charges against them according to Dacoscos./elb