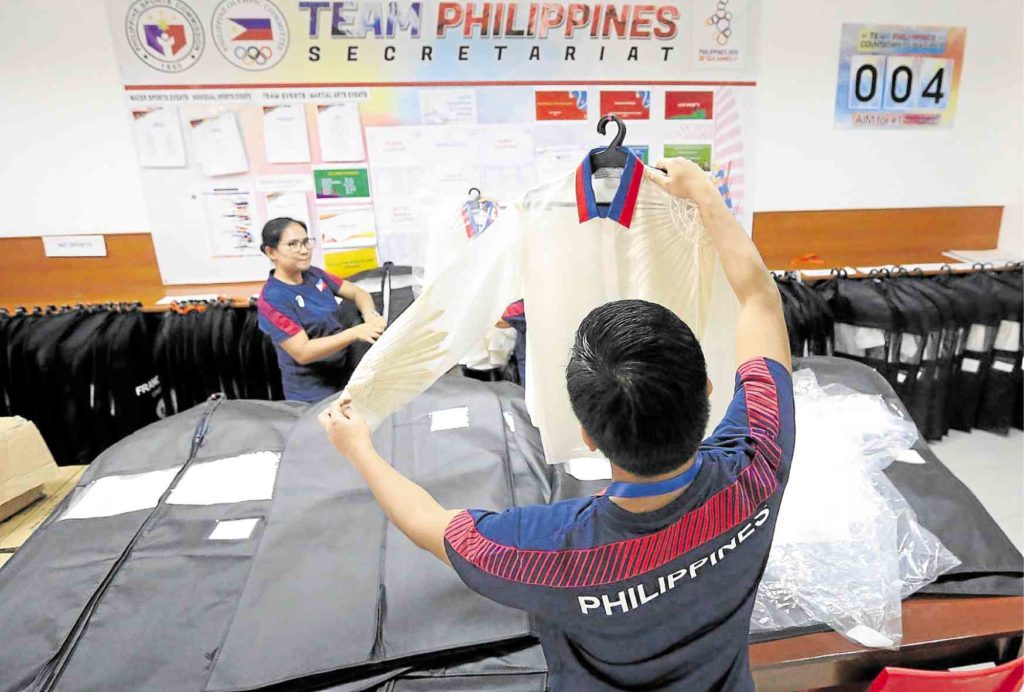 PARADE UNIFORM Filipino athletes and delegates to the Southeast Asian Games will wear barong tagalog, designed by Francis Libiran, as parade uniform during the opening of the biennial sports meet this Saturday at the Philippine Sports Arena in Balagtas, Bulacan province. —MARIANNE BERMUDEZ

MANILA, Philippines — President Rodrigo Duterte is angry over the logistical troubles that have been plaguing the country’s hosting of the 2019 Southeast Asian (SEA) Games, Malacañang said on Tuesday as it urged the organizers to ensure that they have backup plans to avoid inconveniencing foreign and Filipino athletes.

Presidential spokesperson Salvador Panelo said the barrage of complaints from athletes taking part in the regional sports meet had reached the President, who was in Busan, South Korea until Tuesday afternoon.

“Of course, the President does not like what is happening,” Panelo said in an interview over state-run Radyo Pilipinas on Tuesday. “The President is angry over what happened.”

Panelo also supported calls for an investigation into the hosting of the SEA Games once it is over, and for sanctions to be meted out to those who will be proven to be accountable for the mess.

Sen. Bong Go has said he will initiate a Senate inquiry into the problems that inconvenienced athletes.

Sen. Manny Pacquiao, who will be a torchbearer in the Games’ opening, said problems related to the SEA Games facilities should be discussed after the event so as not to distract the country’s athletes, who should be given encouragement and support.

Logistical troubles continue to mar the country’s hosting of the SEA Games as foreign athletes begin to arrive and train for the regional sports meet, which will open on Nov. 30.

The complaints range from accommodation and transportation problems, to crammed shuttles from the airport and inadequate food.

A Filipino team’s complaint over the lack of nutritious food served to local athletes — particularly the combination of rice, egg and “kikiam” (a popular flour-based food)—went viral on social media.

Earlier, Panelo said no heads would roll among the organizers of the SEA Games, even with the complaints from athletes and negative foreign media reports on the Philippines’ hosting of the regional sports meet.

On Tuesday, Panelo urged the organizers to ensure that they have contingency measures to cover any logistical trouble or inconvenience that may occur.

He cited the experience of members of the Cambodian football team, who had to sleep on the floor of the Century Park Hotel in Manila since the team arrived earlier than the agreed check-in time of 2 p.m. on Saturday.

“If the athletes arrived earlier, then why not bring them to another hotel for the meantime? Why would you wait for the 2 p.m. check-in time and make them sleep just anywhere?” Panelo said.

As to complaints about the transportation of athletes, the Palace official said the organizers should have backup vehicles on standby at all times.

In a statement, the DOT said it had partnered with the Tourism Congress of the Philippines (TCP) to implement “best practices in welcoming international guests to the country.”

The TCP is composed of all accredited tourism enterprises and former government officials involved in the tourism industry.

Speaker Alan Peter Cayetano, chair of the Philippine Southeast Asian Games Organizing Committee (Phisgoc), has claimed that the transfer of P7.5 billion in public funds from the Department of Foreign Affairs (DFA) to the Philippine Sports Commission (PSC) caused the logistical foul-ups.

Cayetano was foreign secretary before he was elected congressman and assumed the House leadership.

Senate records showed that even Foreign Secretary Teodoro Locsin Jr. had requested the Senate to transfer the huge funding for the SEA Games from the DFA to the PSC.

According to the Senate journal, then Sen. Loren Legarda said during the Senate deliberations on Dec. 6, 2018, on the DFA budget request that it was Cayetano who had asked that the funds be included in the foreign department’s allocation.

In his interpellation at the time, Sen. Franklin Drilon questioned the propriety of Cayetano’s request, pointing out that supervising sports events was not a mandate of the DFA.

Drilon also questioned the role of Phisgoc, a private foundation composed mainly of public officials, after it was allotted P1.5 billion to oversee the preparations for the SEA Games.

The Alliance of Concerned Teachers said on Tuesday that the government’s allegedly bungled preparations for the Games were indicative of its larger failures in handling taxpayer funds, which have been allocated for “white elephants” instead of social services.