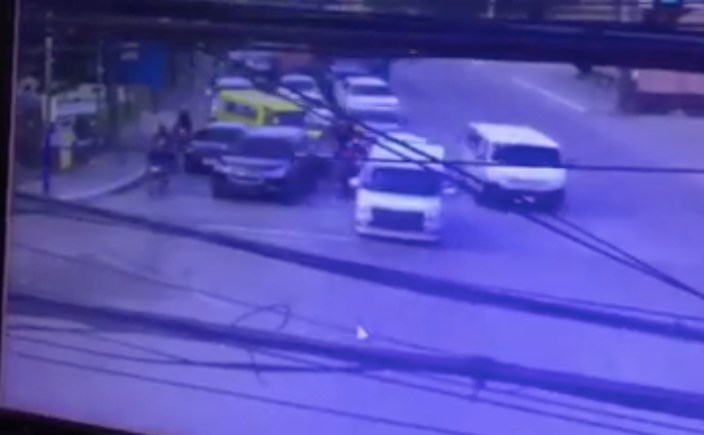 Screen grab of the CCTV footage of the traffic altercation between a civilian driver and a policeman at DM  Cortes St., Mandaue City on Nov. 25, 2019. | TEAM CCTV footage provided by Jeffrey Epan

MANDAUE CITY, Cebu – A civilian driver complained of police brutality against a policeman in uniform who alleged assaulted him over a traffic issue along DM Cortes Street, Barangay Cambaro, Mandaue City that happened last Monday, November 25, 2019.

Jeffrey Epan, 34, a family driver from Barangay Ibabao, Cordova, told CDN Digital on Wednesday, November 27, that he has secured a copy of the CCTV footage of the incident, the police report of the incident from the Opao Police Station in Mandaue City, and has contacted a lawyer who will help him file the complaint against the policeman involved in the road rage incident, identified as Police Staff Sergeant Bernilee Simeon, who claimed to be assigned at the Police Regional Office in Central Visayas (PRO-7).

But Simeon is in the personnel record list of the Regional Training Center in Central Visayas (RTC-7) based in Consolacion, Cebu, where he is undergoing Public Safety Junior Leadership Course, said Usana.

According to Usana, Simeon is assigned at the Regional Health Service (RHS), a national support unit of the Philippine National Police that has a different head office in Camp Crame in Quezon City.

Usana said that although Simeon is assigned in a unit within the jurisdiction of PRO-7, he is not directly under PRO-7. In the case of Simeon, where there is a private complainant, any administration case against him will be investigated by their head office, Usana added.

CDN Digital tried but failed to get the side of Simeon as of this posting. CDND went to RHS office at Camp Sotero Cabahug in Cebu City but a policeman, who asked not to be named for lack of authority to speak to the media, said Simeon was at RTC-7 and was not available for an interview. But Simeon will be called to their office tomorrow, November 28, to get his side on the matter, the same source said.

Epan, in an interview with CDN Digital, narrated that he was traveling along DM Cortes driving the car of his employer sometime past 6 a.m. last Monday when he blew his horn to an SUV in front of him that blocked his way at the outermost lane. He said he only blew his horn because he was going to make the right turn towards the first Mandaue-Mactan Bridge and the SUV allegedly even hit slightly the left side of his bumper.

He said he was heading to make the right turn when the SUV blocked his car and the driver then alighted from the SUV. Epan said he was surprised to see that the driver was a policeman in uniform and allegedly transferred his firearm in front of his waist while approaching him.

The policeman told him they would meet at the Mandaue City Police Office’s Traffic Division at 11 a.m. that day, after which the policeman drove away towards the second Mandaue-Mactan Bridge, bringing with him Epan’s driver’s license.

Epan said he decided to proceed to the Opao Police Station to report the incident and was told to secure a video footage of the incident at the Bantay Mandaue Command Center and a medical certificate at the Mandaue City Hospital.

He said then met with the policeman at the MCPO Traffic Division, where the policeman identified himself as Staff Sergeant Bernilee Simeon from PRO-7.

According to Epan, he got back his driver license but was told by a traffic officer that he was not going to get any citation for his alleged traffic violation because of the supposed “(kind) consideration” of Simeon.

Epan, however, said he believed he had not committed any traffic violation. Moreover, the policeman had no right no hit him.

Epan has since obtained a copy of the CCTV footage of the incident from the Traffic Enforcement Agency of Mandaue (TEAM) Command Center, a copy of which he furnished to CDN Digital.

He said a lawyer has been referred to him by a friend who could help him lodge a case against the policeman.