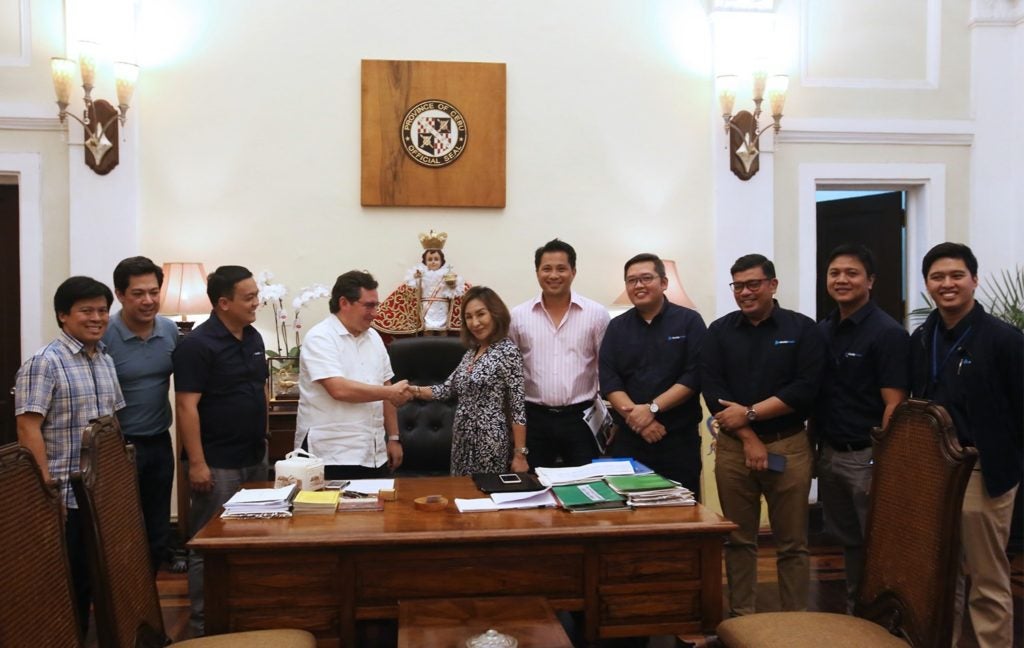 Therma Visayas, Inc. (TVI) representatives led by AboitizPower Coal Business Unit President and Chief Operating Officer Danel Aboitiz (4th from left) and the Cebu Provincial Government led by Cebu Gov. Gwendolyn Garcia (5th from left) pose for a souvenir photo after the signing of a memorandum of agreement on the revised ER 1-94 on October 24, 2019. Also in the photo are Provincial Board Members John Ismael Borgonia and Horacio Paul Franco (first two from left) and Glenn Soco (6th from left). | Contributed Photo

CEBU CITY, Philippines – AboitizPower subsidiary Therma Visayas, Inc. (TVI) is set to turn over a total of P6.5 million in financial benefits to its host areas by 2020, a development spurred by amendments to the revenue sharing program mandated by the Department of Energy (DOE).

TVI, operator of the 340-megawatt (MW) thermal power plant in Barangay Bato, Toledo City, Cebu signed in October a memorandum of agreement with the Cebu Provincial Government for DOE’s amended Energy Regulation (ER) 1-94, which facilitates a streamlined process in the release of revenue shares to the plant’s host communities.

“We are truly grateful for having been given the social license to operate and the opportunity to contribute to the economic growth of the province. We are eager to make it easier for our host communities to access the funds that are rightfully theirs, knowing that these funds will go a long way in providing projects that will benefit them,” AboitizPower Coal Business Unit President and Chief Operating Officer Danel Aboitiz said.

Although Therma Visayas just started commercial operations in 2019, it is now in the process of downloading P2.18 million, P2.5 million, and P1.8 million to the respective trust accounts of the Capitol, Toledo City Government, and Barangay Bato in two tranches between this year and next year.

TVI has also entered into separate MOAs with the Toledo City Government and Barangay Bato following the MOA signing at the Capitol on October 24.

Cebu Governor Gwendolyn Garcia, in a report on Sugbo News, the Cebu Provincial Government’s official publication, said that TVI was the first among all power generation companies on the island to inform her about the recent ER 1-94 developments.

“Of all the power plants in the province, they are the first to manifest intent to give us our shares,” she earlier said.

Garcia added that with the Capitol’s MOA with TVI, the provincial government’s shares will directly go to the trust account that will be opened by the provincial treasurer.

The ER 1-94 program is a policy under the Department of Energy Act of 1992 and Electric Power Industry Reform Act of 2001 (EPIRA), which stipulates that host communities will get a share of one centavo for, every kilowatt-hour (P0.01/kWh) sold by power generation plants operating in its area.

Through DOE Department Circular 2018-08-0021, power generation companies can now directly download the ER 1-94 fund to their host communities. Streamlining the release of funding will ease the process of implementing projects that benefit the host communities.

The ER 1-94 fund can be used by host beneficiaries for the electrification of areas or households that have no access to power, development and livelihood programs, as well as reforestation, watershed management, health, and environmental enhancement initiatives.

In 2018, AboitizPower generated P171 million ER 1-94 funds based on the total attributable energy sales of its various generation facilities across the Philippines. The funds will soon be turned over to its other communities all over the country. / dcb