I had a good reason to miss watching on TV the opening of the 30th Southeast Asian Games (SEAG) last Saturday. While the ceremony was going on in Bulacan, I was with a host of local Chinese family associations, officers of the local Chinese Chamber of Commerce, and the Consul of the Peoples Republic of China.

The event we were in was probably as unique as the SEAG opening but the latter you can watch again on repeat telecasts or on Youtube. This one at Minnan Restaurant in Mandaue was live in front of us: a suite of eight performances revolving around tea, or what we locally call ‘cha’ (as do the Chinese). 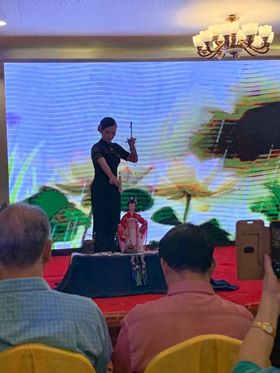 The Japanese borrowed the tradition of preparing and drinking tea from China and elevated it permanently into a very solemn and serious affair that can take up to an hour of slow and silent series of preparations before one could partake it.

Hundreds of years ago, the Chinese actually started this idea of pairing tea to the higher arts like calligraphy, meditation and poetry. Tea is, as my good friend from the consulate, Ethel Taneo-Natera, told me, an important part of Chinese society. For example, she said, when children are in conflict with their elders, the former are supposed to prepare and offer tea to the latter in order to elicit forgiveness and restore order in the family. 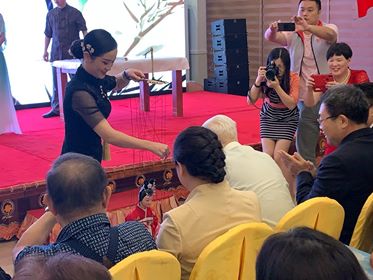 All told, the audience was wowed by four dances and what I would aver as the highlight: a puppet preparing and then serving tea to the guests of honor, Ambassador Frank Benedicto and Chinese Consul Jia Li. This was no mean feat: an elegantly dressed lady in cheongsam carrying a female puppet in traditional Chinese attire preparing tea complete with pot, cups, hot water and oolong tea.

Until Saturday’s show, I never realized that tea could serve as the pivotal point for a host of dances, including this very impressive puppet show, performed by a troupe the flew in from Fujian Province in China, a producer of different varieties of tea, and the traditional home of perhaps 99 percent of Chinese Filipinos. Two dances linked tea with two traditional Chinese martial arts: kung fu and tai chi, while one was a an ethnic tea dance from the She people, composed of a bride, appropriately attired with silver, dancing a local tea ceremony. 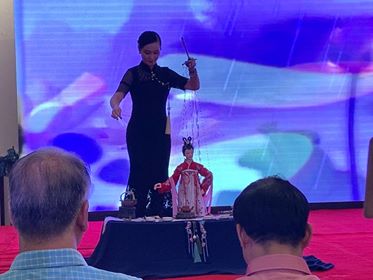 Unfortunately, despite centuries of trading with Fujianese (or Hokkien) Chinese merchants, Cebuanos and Filipinos alike never really imbibed the idea of drinking tea. I remember locally produced tea made in bags by some local Chinese store in my younger days. But this was only served during funerals and wakes. Only my grandparents drank tea and only in the very early hours of the morning when it’s quite cold.

Today of course is a different story. Millennials are lining up to drink cold and mixed with milk and sugar as well as sago and whatnot. 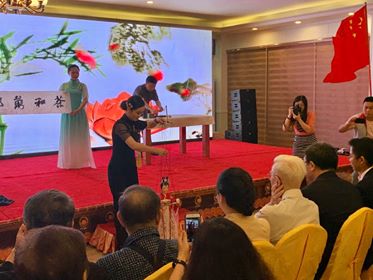 As the show progressed, I began to wonder what could be an equivalent in Cebuano or Filipino culture, having defaulted on the chance to borrow this practice from them. Would “Sayaw sa Tuba” be a good start to expand it into various presentations? Nah, wrong analogy.

Indeed, had we adopted tea as part of our everyday life what kind of performances would we have devised just around the act of preparing and drinking tea.

Read Next
Going on a solo trip? Here’s one thing you can do to make it extra memorable